The parliaments of Myanmar and Vietnam should enhance cooperation and increase the sharing of legislative experience, particularly in improving capacity for female legislators. 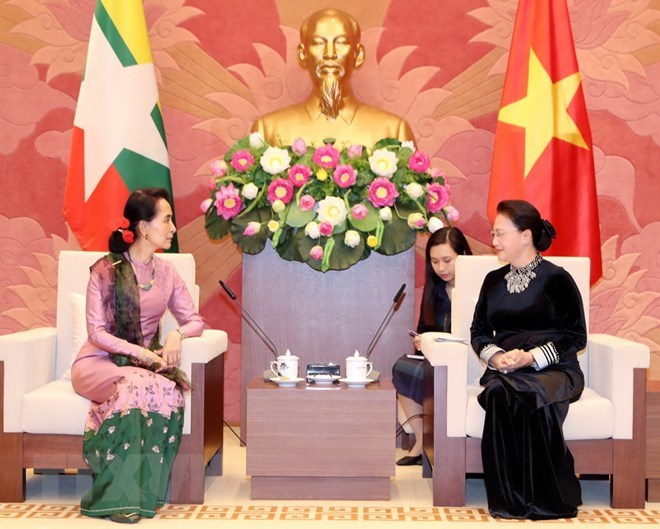 NA Chairwoman Ngan hosted a reception for the Myanmar leader in Hanoi on April 20 during which she lauded the increasingly important role of women in Vietnam and the world at large, adding that women have become more equal to men, many of them became prestigious national leaders like Aung Sann Suu Kyi.

The top lawmaker expressed her hope that, with her ability to inspire and motivate others, the State Counsellor will help Myanmar develop peacefully and stably, and gain greater achievements in the time ahead.

The NA leader highly spoke of the strong progress of the bilateral relations in recent years and affirmed that Vietnam always wants to expand ties with Myanmar in all fields for the benefit of their people.

Both leaders were delighted at the recent development of cooperation between the two legislative bodies. The two sides have well implemented their agreement signed in July, 2013 and maintained regular exchanges of high-level visits since then.

Aung San Suu Kyi said, in her position, she always supports the enhancement of cooperation between the two parliaments as they are very important bodies that represent the people’s voice and are at the forefront of national reforms.

She informed Chairwoman Ngan on the results of her talks with Prime Minister Nguyen Xuan Phuc in which the two sides discussed directions for bilateral cooperation, including measures to encourage Myanmar investors to do business in Vietnam and vice versa, and ways to achieve higher two-way trade value.

The State Counsellor said she was impressed to learn that Vietnamese ministries have cut more than 600 business and investment conditions and she hopes the Vietnamese NA, government and ministries will share experience with Myanmar in this area.

Chairwoman Ngan noted that Vietnam is pushing for vigorous reforms in public administrative procedures with the focus on taxation, trade and customs to create favourable conditions for businesses.

The country has been working to make its business climate into Top 4 in ASEAN, she said, adding that the NA of Vietnam has worked with the Government to review the laws and make amendments to those that cause legal barriers to enterprises.

Ngan went on to say that as Myanmar is a potential market where Vietnamese firms want to make long-term investment, she hopes the State Counsellor will pay attention to facilitating Vietnamese businesses in Myanmar.

Myanmar State Counsellor Aung San Suu Kyi, who is also Myanmar’s Minister of Foreign Affairs and Minister of the President’s Office, paid her first official visit to Vietnam from April 19-20 at the invitation of PM Nguyen Xuan Phuc. Her visit takes place in a context of increased political trust and cooperation between the two nations.

Vietnam and Myanmar have shared a sound traditional friendship. Myanmar was one of the first Southeast Asian countries to set up diplomatic relations with Vietnam in 1975 and whole-heartedly supported Vietnam during the struggle for national independence and reunification.

The two countries elevated their bilateral ties to a comprehensive cooperative partnership during a State visit to Myanmar by General Secretary of the Communist Party of Vietnam Nguyen Phu Trong in August 2017.

Bilateral trade reached 828.3 million USD in 2017, up 51 percent from 2016. Vietnam has become the 7th biggest foreign investor in Myanmar with 70 projects, worth nearly 2 billion USD.-VNA 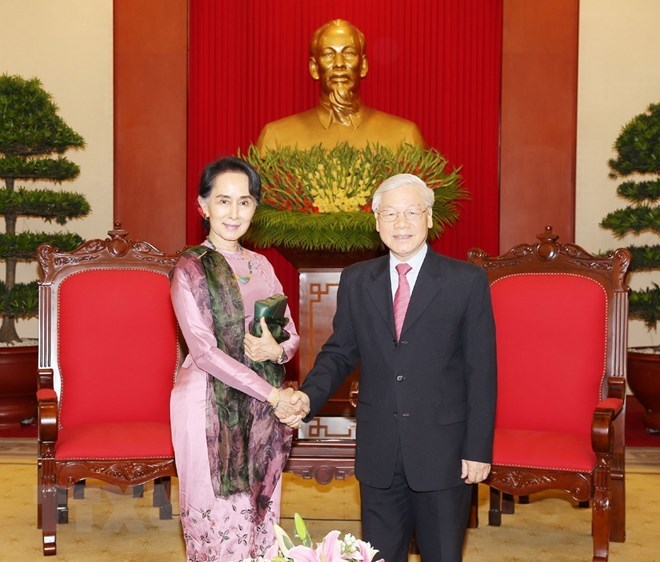 The Party leader made the remarks at a reception in Hanoi on April 20 for Myanmar State Counsellor Aung San Suu Kyi.

He spoke highly of the development of Vietnam-Myanmar relations in recent years and expressed his hope that the State Counsellor’s visit will mark a milestone, contributing to the enhancement of friendship and multifaceted cooperation between the two countries.

The Party chief welcomed the results of the earlier talks between State Counsellor Aung San Suu Kyi and Prime Minister Nguyen Xuan Phuc and suggested the two sides foster cooperation in all areas, particularly trade, investment and cultural exchange as well as within ASEAN and regional and international forums for peace, stability, cooperation and development in the region and the world as well.

Aung San Suu Kyi, for her part, said she was delighted to pay her first-ever official visit to Vietnam and to witness the country’s great socio-economic development under the leadership of the CPV.

The State Counsellor highlighted similarities between the two nations and affirmed that Myanmar will closely work with Vietnam in maintaining peace, stability and cooperation in the region and in building a united and strong ASEAN Community.

She stressed that Myanmar wants to boost comprehensive cooperative relations with Vietnam in the time ahead, through Party, government and people channels, especially the exchange of high-level visits.

This is the first official visit to Vietnam by Aung San Suu Kyi, who is also Myanmar’s Minister of Foreign Affairs and Minister of the President’s Office, aiming to strengthen the bilateral relationship.

Her visit takes place in a context of increased political trust and cooperation between the two nations.

Vietnam and Myanmar set up diplomatic ties on May 28, 1975. The two countries elevated their ties to the level of comprehensive cooperative partnership during a State visit to Myanmar by General Secretary of the CPV Central Committee Nguyen Phu Trong in August 2017. VNA