The first National Cup round match will be kicked off today with all eyes on Hoang Anh Gia Lai versus Viettel tie at the Pleiku Stadium, Gia Lai Province.

The first National Cup round match will be kicked off today with all eyes on Hoang Anh Gia Lai versus Viettel tie at the Pleiku Stadium, Gia Lai Province. 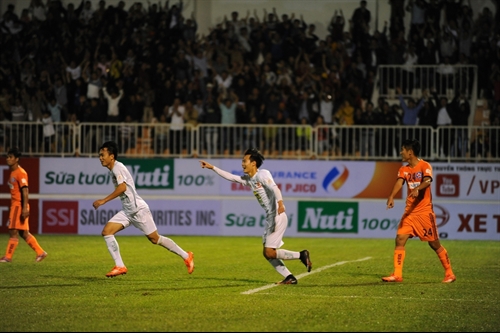 Both sides will be using young players who have trained at their own football training centres.

Haang Anh Gia Lai have been known nationwide for their talented generation over the last few years.

They have a better profile compared to their rivals as they have won the 2014 National U-19, and 2015 U-21 international tournaments. They also entered the quarter-final round last year.

In this match they will welcome back two national team members, Van Thanh and Nguyen Van Toan, who made their mark in the World Cup qualifier against Iraq on Tuesday.

The hosts have other players who fans are familiar with, such as Nguyen Huu Đông Trieu, Phan Thanh Hau and Minh Vuong. They have much more experience as compared to Viettel who mainly focus on training and loaning players.

Viettel’s U-19 squad remained in second place at this year’s national championship. They will be strengthened with some other faces such as Truong Van Thiet, Bui Dinh Son and Luu Cong Son, who are highly appreciated after several years of playing on loan with different teams.

Viettel also have midfielder Bui Tien Dung who knows all Haang Anh Gia Lai’s players after competing against them for half a year in Pleiku.

The winner of the match will play SHB Da Nang in the next round.

The only match of two V. League teams is between Song Lam Nghe An and Sanna Khanh Hoa.

Song Lam Nghe An have been a senior team here but it has not been easy for them to notch up a win today.

It is for the second year that Sanna Khanh Hoa have competed in both, the V. League and the National Cup. They, however, had a draw and a win over Song Lam Nghe An in their two meets in 2015.

The only advantage for Song Lam Nghe An is that they play on their home ground where they are backed by their most faithful and loyal supporters.

Apart from these matches, all other V. League teams are said to have easy games in the first round as their rivals are from the First Division league.

Thanh Hoa, currently second in the V. League table, will face HCM City FC on their home turf. While Thanh Hoa showed their ambitions for being champions, HCM City have just returned to the competition last year after a few years of absence.

Quang Ninh Coal versus Binh Phuoc is the earliest match of this round.

This will be first match that Quang Ninh will be playing under new coach Phan Thanh Hung, while Binh Phuoc are under a new executive director Nguyen Minh Phuong.