New decade of growth built on diligent and smart work

As one of the fastest-growing economies, Vietnam still needs to reduce regulatory burdens and promote economic integration to achieve the country’s sustainable development goals through 2030.

Doan Ha, economist from the Economic Research Institute for ASEAN and East Asia, analyses the elements. 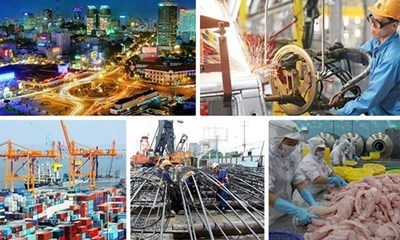 The Vietnamese economy has performed relatively well in the past decade, being one of the world’s fastest-growing economies. With an impressive economic growth rate at 6.2 per cent over 2010-2018 period, the country has lifted itself out of poverty and reached lower-middle-income status.

GDP per capita for 2018 stood at $1,964, a 1.5 times increase compared to 2010. Adjusted for purchasing power, the number more than tripled at $6,600. Even amidst global economic turbulence, the country still managed to achieve a growth rate of 7.02 per cent in 2019, exceeding growth projections from both national and international think tanks.

Notably, Vietnam has also been able to grow in an equitable and inclusive manner. The poverty rate is among the lowest in ASEAN countries, at 2 per cent in 2016, while the GINI index, a measure of economic equality, was 35.3 in 2016, the most recent year for which data is available and has been relatively stable since 2012. This compares with 36.9 in Thailand, 44.4 in the Philippines, and 38.6 in China.

Institutional reforms have been among key instruments to create a business-friendly environment to enhance growth. Institutional reforms target at strengthening macro- and micro-economic foundation to improve the business environment; reducing unnecessary regulatory burdens to reduce the cost of doing business and create a level playing field for all economic agents; and amending and supplementing existing regulations and issuance of new laws or regulations towards a market economy and international standards.

These sustained efforts have resulted in solid improvement of the business environment. The World Bank’s Ease of Doing Business report placed Vietnam at 70th out of 190 economies included in 2019, an encouraging progress from rank 90th in 2010.

Trade liberalisation has provided a substantial boost for Vietnam’s economic growth. Trade openness, measured as the ratio of import plus export over GDP, has been rising steadily, reaching over 200 per cent last year, higher than most ASEAN countries except Singapore. The country has also proved to be one of the most attractive foreign direct investment (FDI) destinations in the region. FDI accounts for approximately 50 per cent of output and 70 per cent of exports in manufacturing. The share of FDI in gross investment has also risen from 14.9 per cent in 2007 to 23.4 per cent in 2018.

Aside from domestic reforms, continuous efforts to engage in regional and international trade arrangements have contributed significantly to the increasing openness. According to the Asian Development Bank’s free trade agreements (FTA) database, the country has signed 13 FTAs, while 12 others are either under consultation or negotiation.

The scope of FTAs has also deepened, from shallow integration mostly dealing with tariff reduction, to more advanced FTAs which cover a broad range of issues beyond tariffs. The scope expansion promises to bring about opportunities and pressure for more comprehensive reforms.

Overall, key economic indicators remain healthy and give rise to optimism. The National Centre for Socio-Economic Information and Forecast has constructed two growth scenarios for the 2021-2025 period. If the country succeeds in taking advantage of Industry 4.0, annual GDP growth can be as high as 7.5 per cent, implying that Vietnam will achieve the goal of becoming an industrial nation in 2030 and avoid the middle-income trap. In a less optimistic scenario, GDP growth is still impressive at 7 per cent per year, with labour productivity growth being 6.3 per cent annually.

However, Vietnam does face challenges that need to be tackled seriously to bring about sustainable growth. One such challenge is the issue of low productivity, particularly for micro and small businesses, and the increasing productivity gap among businesses.

In the manufacturing sector, despite the strong presence of foreign-invested enterprises (FIEs) and the exponential rise in the number of private local businesses, interactions between these two players are weak. Only a half of FDI intermediate inputs are purchased domestically. Out of these, most are sourced from other FIEs.

Domestic private businesses, particularly manufacturing ones, lack sufficient absorptive capacity to benefit from FDI spillovers. Innovation by this sector is limited. International engagement of domestic businesses is also small, since they lack the resources to go global.

In addition, the country’s position in global value chains is still limited to labour-intensive tasks with little domestic value added. That is, the country produces and exports low value-added manufacturing products that require low-skilled work. While low domestic value-added is not necessarily a material problem in the short run, in the long run it affects a country’s competitiveness and impedes industrial upgrading.

Innovation, one key instrument for development in the digital age, needs a further boost. Innovation-related statistics show that Vietnam is still in a catching-up phase but considerable progress has been made in recent years. Research and development intensity in the country is still low at 0.44 per cent of GDP. This ratio is below those of the country’s developing counterparts (for example, Malaysia a 1.3 per cent and Thailand at 0.78 per cent), and much lower than that of developed countries.

The WIPO Global Innovation Index 2018 (a composite index attempting to capture some aspects related to innovation performance in a country) sees Vietnam positioned closely to Thailand, Russia, and Chile, and behind Malaysia, but ahead of the Philippines and Indonesia. In addition, an effective national innovation system which could attach businesses to R&D is not yet in place.

Other obstacles to be tackled include the need to upgrade industry so that higher value-added activities can be developed and expanded, the strengthening of institutions, and improvements to public services and soft and hard infrastructure.

Overall, improvement of the above-mentioned aspects would also enhance resilience to cope with external shocks in the context of rising global uncertainty and the return to protectionism.

In June 2019, the prime minister enacted Decision No.681/QD-TTg setting a roadmap to achieve the country’s sustainable development goals through 2030. Targeted GDP growth rate will be maintained at 5-6 per cent in the 2020-2030 period. Average GDP per capita will increase 4-4.5 per cent yearly. Labour productivity growth rate will be kept at 5 per cent annually. The digital transformation and Industry 4.0 will accelerate in the coming decades. The increasing global uncertainty emphasises the importance of inclusiveness in the growth agenda. These are vital factors to be incorporated into the development strategy toward 2030.

Vietnam has made significant improvements in recent years in reforming and improving the business environment. It is crucial that these reforms continue. In terms of economic integration, accelerating digital trade facilitation, for example, implementation of electronic documentation, electronic payment and national single window enhances transparency and efficiency, and contributes to trade cost reduction. Streamlining regulations and harmonising standards, in particular, improve products’ competitiveness, reduces procedural costs, and provides better market access to businesses.

Second, productivity in the private sector, where companies are small and financially-constrained, could also be improved. Vietnam has been successful in attracting FDI, and increased technology spillover from this is the next step to work towards, as is the need to boost the country’s ability to absorb technological knowledge.

Third, reform of the educational system, with more emphasis placed on technical training and practical skills, especially in the era of the digital economy, is also important. Development of educational system that could equip workers with appropriate skill sets for the new era is crucial. Availability of a skilled labour pool is imperative for both domestic businesses, which would eventually rely on self-innovation and technology adoption for survival and growth, and international investors, who find hiring low-skilled workers less attractive as wages rise.