The National Assembly voted to approve the Prime Minister’s appointment of 21 cabinet positions, including three Deputy Prime Ministers for five-year terms, during the ongoing and last 11th session of the 13th legislature in Hanoi.

The National Assembly voted to approve the Prime Minister’s appointment of 21 cabinet positions, including three Deputy Prime Ministers for five-year terms, during the ongoing and last 11th session of the 13th legislature in Hanoi. 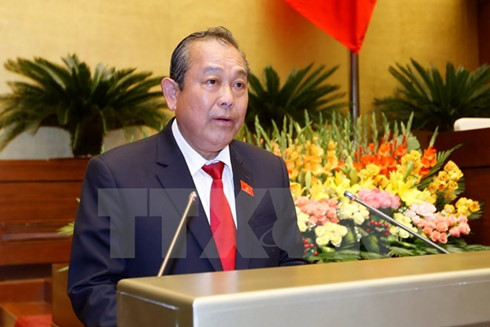 Expressing their views on the new posts on the sidelines of the NA meeting on April 9, the three new Deputy PMs and 18 other ministers and cabinet members said they were honoured to be selected as cabinet members and vowed to do their best to fulfill their tasks in the new term.

Deputy PM Trinh Dinh Dung said that as an assistant of the Prime Minister, he would focus on lifting barriers in production for domestic business enterprises and local people.

In addition, Dung, who previously led the Ministry of Construction, said he will improve the investment environment as a way to promote financial sources from all domestic and international economic sectors for socio-economic development.

Dung said he will focus on economic restructuring aiming at creating high-quality industrial and agricultural products prevailing in both domestic and world competition.

This would give the Vietnamese economy a boost and help it widely and deeply integrate into the world economy, said Dung.

Sharing his view on the new post, Deputy PM Truong Hoa Binh, who was former Chief Justice of the Supreme People’s Court, said he would use his experience in the legislative sector – particularly in the prevention and fight against crime – to help the cabinet find effective measures against crime and ensure social order and political security.

As a cabinet member with the highest votes of 463, newly-elected Minister-Chairman of the Committee for Ethnic Affairs Do Van Chien said he would continue to complete policies on socio-economic development in mountainous and ethnic minority regions, including a boost in investment for poverty eradication, health care and education measures.

NA deputies have expressed hope that the new Government will build on pass successes and issue timely policies for socio-economic development.

They shared the view that the Government must devise solutions to achieve the goals set in the last tenure while continuing to make forecasts and issue specific measures.