According to Cao Van Trong, chair of Ben Tre province, in addition to Ba Tri Reservoir with the capacity of 1 million cubic meters, Ba Lai River will turn into a 1 billion cubic meter reservoir which will provide fresh water to Ben Tre City and neighboring districts, industrial zones and hospitals. 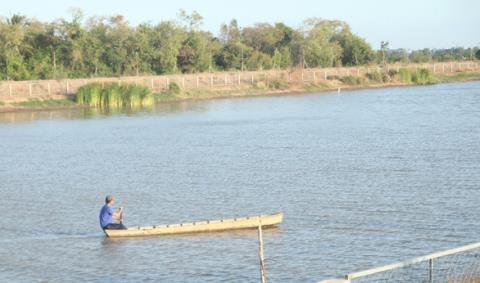 Meanwhile, Kien Giang province has asked MARD to submit to the Prime Minister a plan to budget VND400 billion for the building of a reservoir on Nguyen Tan Thanh Canal.

Drought and saline intrusion are the most serious in Ca Mau, where many roads have subsided by hundreds of meters.

The province is also building a reservoir in the U Minh Ha Forest buffer zone, estimated to cost $10 million, with funding from the World Bank.

Luu Hoang Ly, director of the Bac Lieu provincial agriculture department, said that it would be better to think of storing freshwater for the entire Mekong Delta, not only Bac Lieu or any other province, and that it is necessary to consider water sources from upstream.

For example, in order to effectively store water for Bac Lieu, it is necessary to set up reservoirs in Kien Giang or O Mon (Can Tho). At present, reservoirs built in some provinces can satisfy only part of the water demand.

The building of reservoirs to store water for the whole region was mentioned many years ago, but this was not implemented.

“I believe that developing local reservoirs is a necessity, but this is not enough to satisfy demand,” he explained.

“If there are works for the whole region, each locality will not only have water, but also can decide which crops to farm,” he said.

The prolonged drought and saline intrusion which began in late 2019 has caused serious damage to farms in Mekong Delta. The situation is expected to last until April.

Bac Lieu province reported that more than 5,400 hectares of the rice growing area north of Highway No 1 is seriously lacking fresh water. The early saline intrusion may cause damage to 5,000 hectares of shrimp farms.

Ca Mau reported that 16,000 hectares of cultivation land has been affected by saline intrusion and drought, while 3,500 households are lacking water.

The national irrigation department has reported a staggeringly low level of water reserves in northern and central regions, signalling the threat of a severe drought in 2020.