Nguyen Sy Hien was appointed chairman of the National Coach Council, according to the Viet Nam Football Federation (VFF).

Nguyen Sy Hien was appointed chairman of the National Coach Council, according to the Viet Nam Football Federation (VFF). 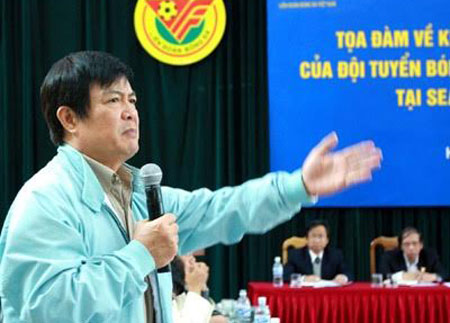 The position has been vacant for about two months.

Hien was formerly VFF deputy chairman and chairman of the council from 2010 until 2013 when Tran Quoc Tuan took over.

Hien, is expected to have experienced assistants such as Le Huynh Duc, Nguyen Huu Thang and Hoang Anh Tuan to support him. They will work together to look for and evaluate national team coaches.

A friendly tournament, the FLC Cup 2016, will be held on January 10-23 in Thanh Hoa Province with the participation of six V.League 1 teams.

It was his second win over Giang, the first came in their group round match earlier this week.

On the women's side, Tran Thi Tam Hao of HCM City was surprisedly defeated 3-6, 5-7 by her teammate Huynh Phi Khanh in the singles final.