Dutch Professor Gerardus’t Hooft, who won the 1999 Nobel Prize in physics, attended a meeting with students and science enthusiasts in Quy Nhon on July 25.

Dutch Professor Gerardus’t Hooft, who won the 1999 Nobel Prize in physics, attended a meeting with students and science enthusiasts in Vietnam’s central city of Quy Nhon on July 25 as part of the annual Rencontres du Vietnam programme. 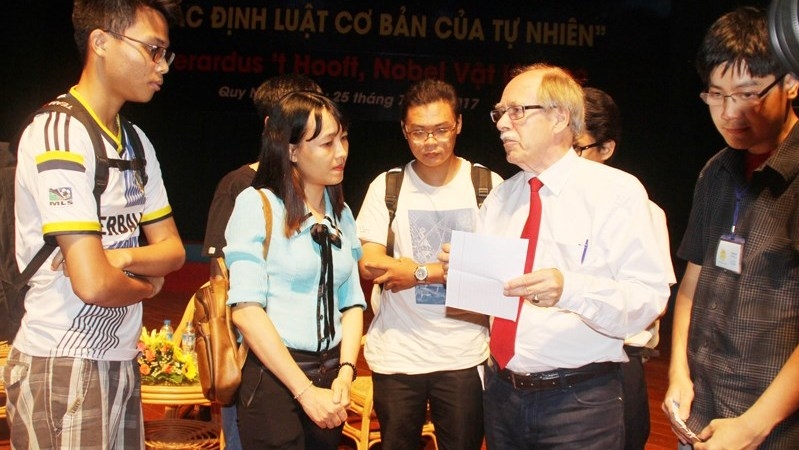 Under the theme “Basic laws of nature”, Professor Hooft explained classic laws of natural science in a simple and easily comprehensible way by associating them with experiences in our daily lives.

He said that a number of issues arose in the early 20th century and could not be explained by these classic laws, requiring more advanced theories to interpret such problems.

After being fine-tuned, the laws were able to interpret phenomena occurring in conditions very different from the observable world of humans, that is the world of minuscule objects such as atoms and sub-atomic particles which follows the laws of quantum mechanics.

Professor Hooft concluded that all these theories come from simple theories that the universe would be unable to function without.

At the talk, the Dutch physicist also answered many questions posed by young science lovers about the transformation of matter in black holes, the speed of a proton, and the workings of the gyroscope.

Rencontres du Vietnam is a programme that fosters exchanges between Vietnamese or Asia-Pacific scientists and colleagues from other parts of the world, including many Nobel laureates.