VietNamNet Bridge - Two farmers in Binh Thuan province were sentenced to jail for "taking bribes" just because they prepared files for several poor farmers to borrow soft loans and got paid. The sentence was later suspended.

VietNamNet Bridge - Two farmers in the central province of Binh Thuan were sentenced to jail for "taking bribes" just because they prepared files for several poor farmers to borrow soft loans and got paid. The sentence was later suspended. 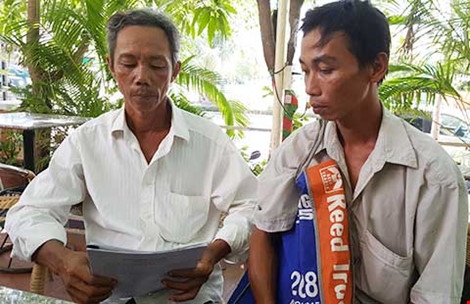 The farmers, Nguyen Thanh Nam and Nguyen Thanh Tuan, had been prosecuted and indicted on charges of accepting bribes and sentenced to seven and eight years in prison, respectively.

The mission of the two men was receiving the written loan request of the poor and organizing meetings to select the appropriate borrowers and then send the list of borrowers to the poverty reduction committee of Ham Can commune.

They then had to submit the capital borrowing files to the Ham Can People’s Committee for approval and transfer the files to the Bank for Social Policies of Ham Thuan Nam district to accomplish the borrowing formalities, sign in documents and take money from the bank to borrowers, who are poor households in the village.

They were also assigned to supervise and urge the poor to use soft loans from the Bank for Social Policies for the right purpose, to pay the interest and loans on schedule and verify conditions to extend the loans.

Most of the poor households in Lo To did not know the formalities to get loans so they asked Tuan to do it and then they only signed the documents.

Seeing Tuan was busy and did not have time to do farmwork for his own family, Nam, at a meeting to instruct poor households in accessing capital from the Bank for Social Policies, asked these families to pay a little for Tuan to partly cover his travel expenses (the road from Lo To village to the Bank for Social Policies of Ham Thuan Nam district is nearly 30km and the road quality is bad) and phone charges to help them borrow money. The people agreed.

In March 2015, Ham Thuan Nam district police suddenly prosecuted and arrested the two farmers on charges of taking bribes. They were confined for almost two months and then were released on bail.

For Nam, the indictment said that he did not directly demand bribes but he “suggested”to poor households to pay Tuan. Tuan also gave Nam VND1 million ($45) so Nam bears criminal responsibility for the act of taking bribes.

In August 2015, Tuan was sentenced up to 8 years and Nam 7 years in jail, although all people who were summoned to the trial confirmed that they only paid Tuan fees for his effort to help them borrow the loans, not to bribe him.

Both Tuan and Nam claimed innocence.

According to Tuan, as a farmer, he could not do anything for his family when devoting time to help poor families fulfill formalities to get loans from the Bank for Social Policies.

During this process he had to travel a lot to take money for local households. Recognizing his efforts and hard-working job for two years, some people voluntarily paid him a little. He did not force or ask to be paid.

Meanwhile, Nam said he had not received any money from anyone. The amount of VND1 million ($47) that he was accused of taking from Tuan was money that Nam had paid in advance to Tuan to buy four chickens as gifts to staff of the Bank for Social Policies in order to have their assistance to disburse the loans to poor people in Lo To village. After the loan recipients gave Tuan money, Tuan returned Nam VND1 million.

At an appeal in December 2015, plaintiffs said investigators read for them to write down the denouncements and they had not intended to denounce Tuan and Nam. The People’s Court of Binh Thuan province also said that the content of denouncements is similar, and with similar handwriting.

After reinvestigating the case, the police of Ham Thuan Nam district suspended investigation against the two farmers under Article 25 of the Penal Code. The police did not admit that the two farmers were prosecuted unjustly and they will not be compensated and receive an apology.