Feasibility, ease of implementation and transparency in information are factors that will prove decisive in attracting investment for agriculture projects, stakeholders agreed at a conference held on Monday.

Feasibility, ease of implementation and transparency in information are factors that will prove decisive in attracting investment for agriculture projects, stakeholders agreed at a conference held on Monday. 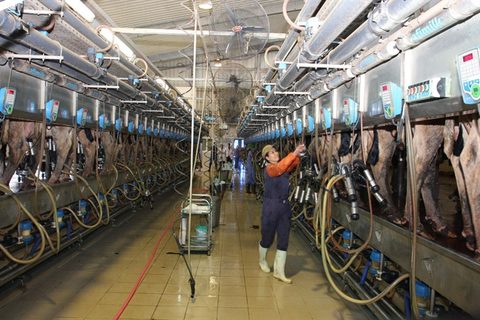 Milking by machines at TH True Milk’s cow farm in Nghia Dan District of the central province of Nghe An. By 2020, the company aims to become the largest milk producer in Asia with 2,000 tonnes of milk a day, and create stable jobs for 1,200 employees.

Representatives of enterprises said Government Decree 210/ND-CP that took effect in 2013 failed because it did not resolve the roots of investors’ hesitation, which are current land and tax laws as well as complicated and time-consuming administrative procedures for projects that require large investments.

Deputy PM Hue noted that as of September 2016, there were only 4,424 agro-forestry-fishery enterprises across the country, less than one per cent of the total.

In the three years after it took effect, Decree 210 lent support for just 64 projects with relatively little investment and limited results.

Thai Huong, Chairwoman of the TH True Milk Group, said concerned ministries should “sit together and work out a definitive standard set for agricultural products” if the country is to push towards hi-tech agriculture.

Noting that Decree 210 “concentrated too much on providing support sourced from the State budget,” Deputy PM Hue called for different measures to attract private investment into agriculture.

He said this would have to be done by streamlining institutions and mechanisms and policies. Financial support should be provided mostly in an “indirect manner,” i.e. tax cuts or waivers, while “direct financial support” should go to small- and mid-sized enterprises, encouraging innovation and start-ups, or a “leading company capable of becoming a national brand.”

This financial support, he said, cannot be sourced just from the State Budget or localities’ budget, but also from science and technology development funds and other integrated programmes.

Expressing appreciation for all the comments from participants, the Deputy PM said “it’s obvious now that the draft decree is far from satisfactory.”

He directed the Ministry of Planning and Investment as well as the Ministry of Agriculture and Rural Development, currently in charge of drafting the new decree, to do further research and exert more efforts to complete it.

There are high expectations from the new amendments. One of them states that enterprises investing in agriculture may be eligible for land tax waivers or considerable reduction thereof.

Enterprises implementing agriculture projects with their own resources may still receive support from the government during implementation phases.