Officials, Party members and people nationwide have expressed their trust in the new crop of Vietnamese leaders who were elected to the 12 th Party Central Committee during the ongoing 12th National Party Congress in Hanoi on January 26.

Officials, Party members and people nationwide have expressed their trust in the new crop of Vietnamese leaders who were elected to the 12 th Party Central Committee during the ongoing 12th National Party Congress in Hanoi on January 26. 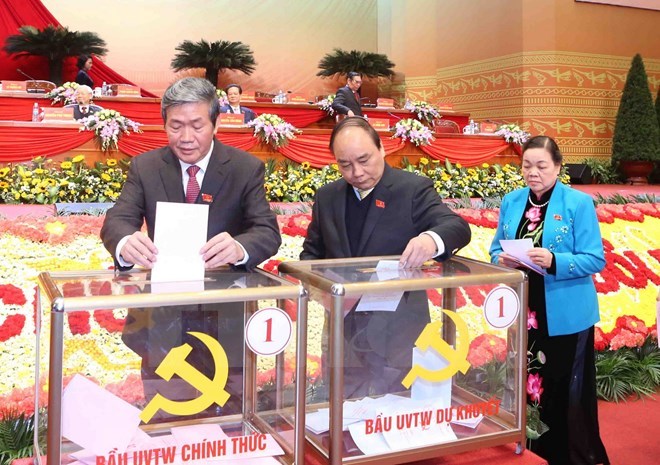 Delegates cast ballots at the Congress.

The nomination of officials outside of the candidate list is an improved democratic step, he said, adding that almost all cities and provinces have had officials elected to the Committee.

He believes that the new leadership will steer the country across sectors comprehensively toward firmly safeguarding national sovereignty and maintaining an environment of peace in service of development.

Minister of Agriculture and Rural Development Cao Duc Phat, hailed personnel preparations for the election as thorough and democratic, saying that it reflects the delegates’ sense of responsibility to the Party, the country and the people.

Lo Doan Kieu, 72, a retiree in Nguyen Trai precinct, in the northern city of Ha Giang, said he believes the newly elected officials will have both the talent and moral virtue to lead the country forward.

He hoped that more positive and radical changes will be made in education, particularly in mountainous provinces where there is still a lack of schools and learning tools.

Nguyen Van Vang, Chairman of the Xin Cai communal People’s Committee, wished that more attention would be paid to personnel training in remote and mountainous areas.

Head of the Ca Mau provincial Department of Cultivation and Plant Protection Nguyen Tran Thuc described the Congress as a focus of brainpower, solidarity, renewal and democracy.

He confidently said that policies and guidelines on agriculture, rural areas and farmers will be put in place, helping the country catch up with world development trends.

Congress delegates stress training a must for capable Party officials

Many delegates to the ongoing 12th National Party Congress have shared the view that training is a must for the new contingent of officials so that they can perform their tasks well in the coming tenure.

Speaking on the sidelines of the Congress in Hanoi, they said it is necessary to intensify Party building and reorganisation to prevent and combat the degradation of political thought, morality and lifestyle, and quell notions of “self-evolution” and “self-transformation” inside the Party.

Delegate Nguyen Viet Dung from Ho Chi Minh City said although the Party personnel work was improved during the last tenure, it hasn’t met requirements. He hoped that personnel training and preparations for the future generations of Party leaders will be fine-tuned after this Congress.

Nguyen Huu Lam, a delegate from Nghe An province, said special attention must be paid to the training of officials, especially those at the grassroots level who are close to people and directly realise the Party’s guidelines and policies.

As Party building is a regular and continuous task of all-level Party organisations, it must be carried out in terms of thought, politics and organisation, delegate Le Hoang Phung from Lam Dong province said.

Phung added that the Party building needs to focus on fighting the degradation of political thought, morality and lifestyle among Party members, especially senior officials, and on preparing personnel for leading positions.

The work is one of the top missions that the entire Party must fulfill to achieve the targets set for the next five years, the delegate noted.