‘One curriculum, many sets of textbooks’ program: will it occur?

The idea of ‘one curriculum, many sets of textbooks’, which was praised as encouraging creativity and renovation, is part of a draft curriculum for general education the Ministry of Education and Training (MOET) has opened for public opinion.

VietNamNet Bridge - The idea of ‘one curriculum, many sets of textbooks’, which was praised as encouraging creativity and renovation, is part of a draft curriculum for general education the Ministry of Education and Training (MOET) has opened for public opinion. 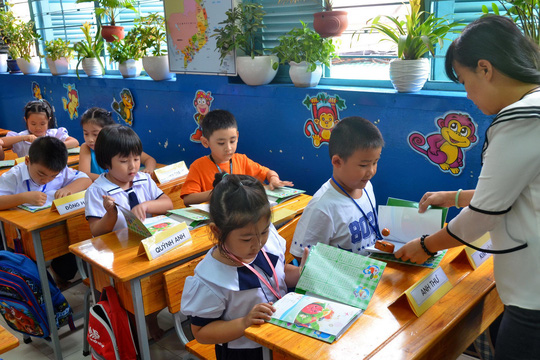 HCMC, which has good conditions in staff and financial capability, remains the only locality in the country allowed by MOET to compile textbooks for general school students.

The textbooks will be designed in a way to fit students’ capability and reflect the specific natural and social conditions of the city.

However, experts have warned that compiling textbooks specifically for the city’s students has proven to be a difficult mission.

In principle, textbooks will be compiled based on the curriculum framework to be released by MOET.

But many analysts said the framework set by MOET is ‘relatively confused’.

MOET plans to design curricula for many subjects, but some subjects overlap, making it difficult to compile textbooks based on the framework.

“MOET creates a subject called ‘creative experiences’, which means there will be textbooks to serve the subjects. ‘Experience’ always is associated with ‘activities’, but it is difficult to describe ‘activities’ in books,” a primary school teacher in district 3, HCMC, said.

A senior official of the HCMC Education and Training Department told the press that he thinks Nguyen Minh Thuyet, chief editor of the new general education program, has his reasons when advising local authorities not to compile textbooks on their own and use other books instead.

He said it was costly and time-consuming to compile textbooks.

“To date, MOET still leaves the question open on whether local authorities should compile separate textbooks of their own,” he said. “So, there is no basis to do this, and it is difficult to do this because of the lack of resources.”

According to Nguyen Van Hieu, deputy director of the HCMC Education & Training, some documents serving teaching at schools in HCMC compiled by the city’s education department are highly appreciated, but these must not be considered textbooks, because they are compiled in accordance with other curricula.

He said if HCMC education department compiles textbooks of its own as planned, it will have to join forces with the Education Publishing House. But it will not act alone.

Nguyen Thi Thu Hien, a teacher at Nguyen Huu Tho High School in district 4, commented that the most important thing is to compile a standard curriculum which points out what to teach and how students will learn. She said there was no need to have many sets of textbooks.