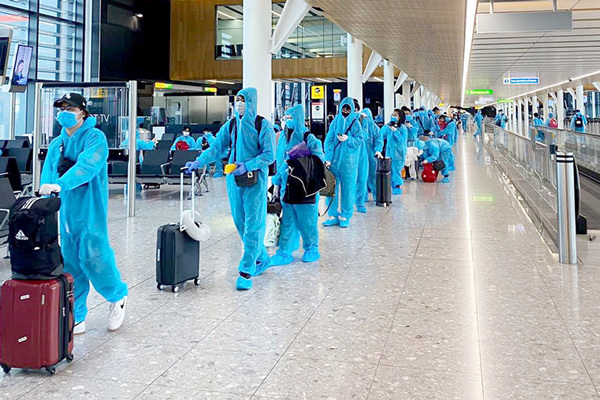 Opening the economy in current conditions is understood as opening step by step, opening with focus on some business fields. Upon opening, Vietnam must be sure that it can protect Industrial Zones and prevent Covid from penetrating the IZs. This can be done with cooperation among enterprises, local authorities and workers.

Factory owners need to accept the fact that part of their workers stay at the factories and work and live in harsh conditions. Enterprises need to join forces with workers and local authorities to establish and re-organize production lines, and divide groups of workers according to residential quarters.

In the second step, localities and provinces need to create connection and trade exchange, instead of just setting requirements for a negative nCoV testing results. HCM City is an economic center of the country, but its citizens have to have negative test certificates to be able to visit other provinces.

It is necessary to organize a ‘green channel’ to facilitate trade exchange as was done with Bac Giang’s litchis. This is the responsibility of authorities.

That is opening the economy. It is not opening wide. Vietnam now has 22,000 Covid cases out of 98 million people. The rate is still low. Vietnam still can control the epidemic and localize it. Most infected people are being found in quarantine zones.

It is necessary to keep calm to find the most reasonable solutions to fight the pandemic. Imposing lockdowns is not a method that many countries apply.

Vietnam is still persevering in opening the door, step by step, in every area, in every business field, including the tourism industry. Local newspapers recently published a series of articles on rescuing the aviation industry. This is one of the solutions the Government is applying to open the economy.

International tourism companies put high hopes on the summer tourism season to gradually recover trade and service activities. Twenty-eight countries of the EU have opened their door since July 1.

Of course, Vietnam cannot do the same as the EU, which has a high vaccination rate and many vaccines. They are expected to have 2 billion vaccine doses in excess by the end of this year. Thailand and the Philippines also have policies on opening the economy. Thailand, for example, now has flights from Bangkok to Phuket.

In Europe, they will begin the holiday from mid-July to mid-September. Europeans and Americans always set travel plans early. Therefore, Vietnam should get ready to open the door to travelers right now, not wait until mid-July, because it will be too late and Vietnam will lose one more tourism season.

The problem is that the experts on pandemic fighting need to give to the Government a solution to the question about whether visitors should be required to have two shots of the vaccine to enter, or just be required to follow the 5K message.

The job of localities is discovering infections, tracing them and restricting the spread. The task of the National Steering Committee for Covid-19 Prevention and Control is releasing decisions to control the pandemic and give advice to the Government. It cannot make deep interventions into localities.

Businesses are cooperating well with groups of experts coming to localities to help them fight the pandemic. Businesses arrange accommodations, food and means of transport, while local authorities create the most favorable conditions in equipment.

One of the positive things in HCM City recently is that Deputy Prime Minister Truong Hoa Binh has made drastic directions to minimize the virus spread in industrial zones.

If media campaigns cannot be done well, it will be difficult to reopen the tourism market. For example, Hoi An and Quang Nam don’t have an epidemic, but travelers are not going to those localities. So, if only one locality opens its doors, the opening won’t have much significance. It would be better if the whole country opens the door.

The opening of localities needs to be attached to trade exchange activities nationwide.

For example, previously, Hoi An people had the habit of going out for breakfast and drinking coffee. But now, because of the pandemic, they don’t go out. If we don’t handle it well, purchasing power will decrease, and once demand decreases, it will be very difficult to recover it.

There should be a roadmap for gradual opening. Should we think of allowing foreign travelers to Vietnam, who have had two shots, to travel freely like Vietnamese citizens?

It’s not by chance that the Prime Minister has conveyed a message calling on people to cooperate with the Government in fighting the pandemic.

When the pandemic wave broke out in Hanoi and northern provinces, many people lost jobs, but they still could return to home villages and do agricultural work. But when Covid broke out in the south, people have to stay in the localities where they work and pay for room rent, electricity and water, and daily basic needs.

A VND26 trillion package has been launched to help people and businesses in difficulties. The Prime Minister has spent 50 percent of his time in the first 100 days of his office to deal with the issues related to the pandemic.

If localities understand the spirit of the Government's directions and make innovations in governance, the goals set out for the last six months will be realized.

In the first half of the year, the former and new Government took the initiative in applying four solutions to fight the pandemic. Three solutions have been done, while the fourth solution – giving direct support to workers – was implemented some days ago with the launch of the VND26 trillion package.