Paper made of coconut milk in Hoi An impresses tourists 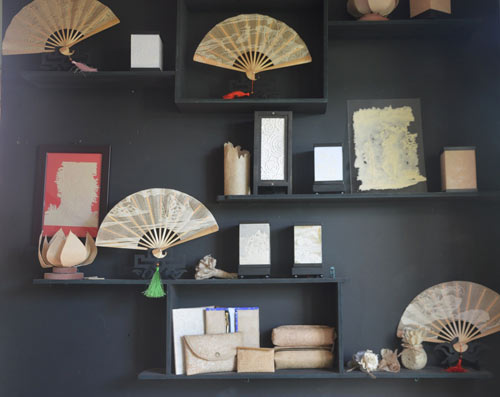 For the last six months, the Viet Paper Garden on Ly Thuong Kiet street of Hoi An has been covered with big leaves of coconut trees. The image of three young men diligently working with the leaves, splitting them, cooking and surveying the sheets of paper with light purple color has become familiar to many Hoi An people.

The hard work of the young men has created an original kind of paper – coconut-milk paper called Nipa.

Tho, Ha and Thang came from different provinces to Hoi An to seek business opportunities. They met each other, became friends and co-workers because of the same passion for arts.

At first, they nurtured the plan of making paintings on a completely new material. The idea of creating paper from coconut milk came accidentally when they visited coconut forests in Cam Thanh.

After deciding to make paper of coconut milk, the men stayed in the coconut metropolis for one month to study trees which help build ‘purely Vietnamese style’ houses. And they decided to buy coconut big leaves to the locals’ surprise.

At first, the men thought about a way to make pulp. After a lot of effort, they found a grinding machine made in early 20th century and carried it from HCM City to Hoi An City.

After four months of refurbishment, the old machine finally could run smoothly to serve the men who had given up their jobs to work on the coconut-milk paper project.

Asked about the process of making pulp, Thang said coconut leaves are split into small pieces, then cleaned thoroughly by soaking in water before being cooked. The grinding machine pilverizes the pieces into powder. After that, the pulp is mixed with water and spread within a frame.

Coconut-milk made paper has a slightly purple color. However, additives can be used to create paper of different colors.

The handicrafts made by the three young men are now displayed as unique souvenirs, attracting travelers to Hoi An.

Thang said they are considering expanding the production scale as there are more and more orders from HCM City and Hanoi.