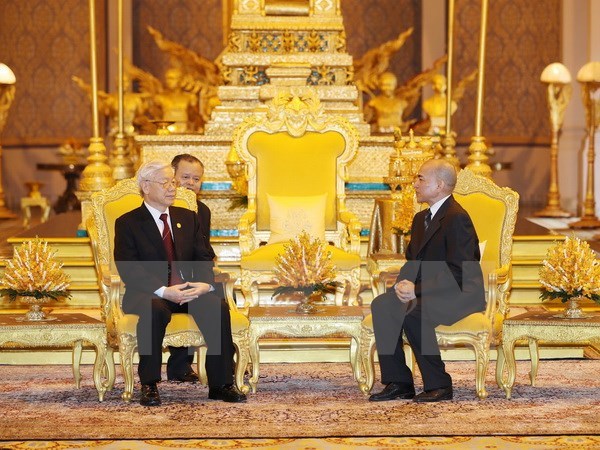 Welcoming the Vietnamese Party chief and his entourage, the King described the visit of Nguyen Phu Trong as a especially important milestone in the good neighbourliness, traditional friendship and comprehensive cooperation between Vietnam and Cambodia in the context of the two countries celebrating 50th anniversary of diplomatic ties (June 24).

The host and guest exchanged news on their respective countries’ recent affairs and expressed their delight at progress achieved by both sides.

The two leaders looked back on bilateral engagement in the past five decades and agreed that the ties, fostered by generations of Vietnamese and Cambodian leaders and people, have overcome obstacles and yielded fruitful outcomes.

King Sihamoni expressed his deep gratitude toward Vietnam’s support for Cambodia during its past struggle for national liberation and against the genocidal Khmer Rouge regime, as well as in the periods of rebuilding and developing the country.

Calling Vietnam a great and trustworthy friend of Cambodia, he said his nation will always stand by Vietnam’s side as a good neighbour.

For his part, Party General Secretary Trong stated the growth of Vietnam is closely linked with assistance from international friends, including Cambodia.

He took the occasion to invite King Nodorom Sihamoni and the Queen Mother Norodom Monineath Sihanouk to visit Vietnam this year and in following years, which was accepted by the King.

Both host and guest pledged their commitments to spare no effort in imbuing the next generations with the Vietnam-Cambodia traditional relationship and comprehensive cooperation.