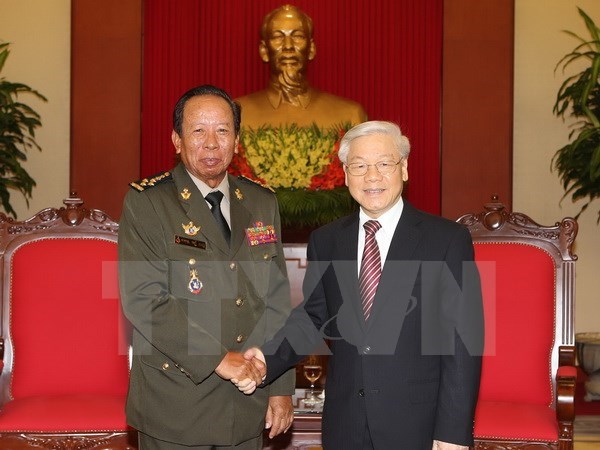 The Party leader hailed the outcomes of talks between Deputy Prime Minister and Defence Minister Tia Banh and the Vietnamese Defence Minister, and requested the two defence ministries to carry out signed agreements in an effective manner, thus firmly safeguarding the achievements that each country have gained, taking forward their national construction cause.

He also expressed pleasure at the development of the good relationship between the two countries, and reiterated Vietnam’s policy of giving top priority to developing the good neighbourly ties, traditional friendship and comprehensive and long-term cooperation with Cambodia.

Deputy PM Tia Bank congratulated Vietnam on the great achievements in the past years, and took the occasion to express profound gratitude for the great support that the Vietnamese Party, State and People’s Army have given Cambodia in the past as well as nowadays.

He affirmed the Cambodian Defence Minister will closely cooperate with the Vietnamese counterpart for the effective implementation of signed agreements.