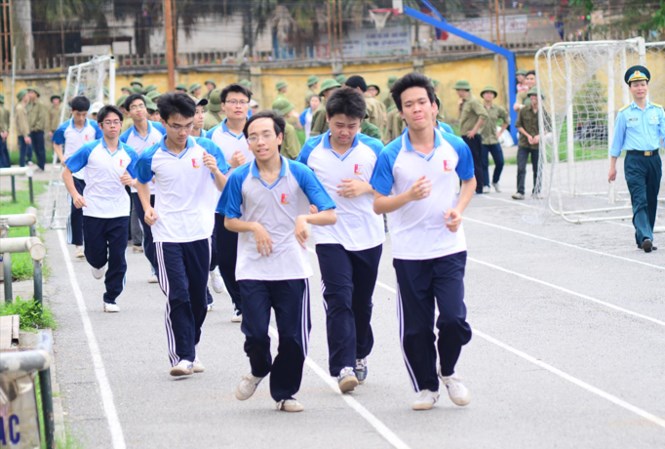 The student left home because she was tired of physical exercise lessons and feared she would fail the exam.

The subjects are also taught in many other universities. At the Hanoi University of Civil Engineering, students have to attend 150 periods, including 90 periods for basic training and 60 periods for optional sports

“Many students in my class fail the subject because they have poor health,” he said.
“I want to learn how to swim,”

The student complained that the facilities in the school are not good enough for physical exercise and sports practice.

Meanwhile, a student at Hanoi Open University said Vietnam Trade Union University’s students were ‘lucky’ because they have grounds for practice, while his school has none.

Students at the Hanoi Open University take part in a military training course in Xuan Mai in the suburb of Hanoi. They have physical exercises lessons and take full advantage of the large practicing ground.

“We go to military training class from Monday to Friday. On weekend, we practiced physical exercises,” he said.

A lecturer at the Vietnam Trade Union University said there are many problems in physical training. Students have 30 periods for middle-distance running, two periods a week.

“Middle-distance running is the kind of sport which requires regular practice. Students only have two periods a week to practice,” the lecturer said.

“Strict requirements are set on students as if they are professional sports students,” he said, adding that sometimes students lose consciousness when running.

At the Hanoi University of Foreign Trade, student Tran Xuan Du, said physical exercise is not a big problem for him. He takes aerobics, dance sport, badminton and swimming and can easily pass the exams. However, many of his classmates fail.

Vietnamese general school students also say they are not enthusiastic about the physical education lessons. Meanwhile, the Ministry of Education & Training plans to raise the number of physical practice lessons to two per week.

The Hanoi student who loves mathematics