Prime Minister Nguyen Tan Dung requested fighting saltwater intrusion as a key political task during a conference in the Mekong Delta city of Can Tho on March 7.

Prime Minister Nguyen Tan Dung requested fighting saltwater intrusion as a key political task during a conference in the Mekong Delta city of Can Tho on March 7. 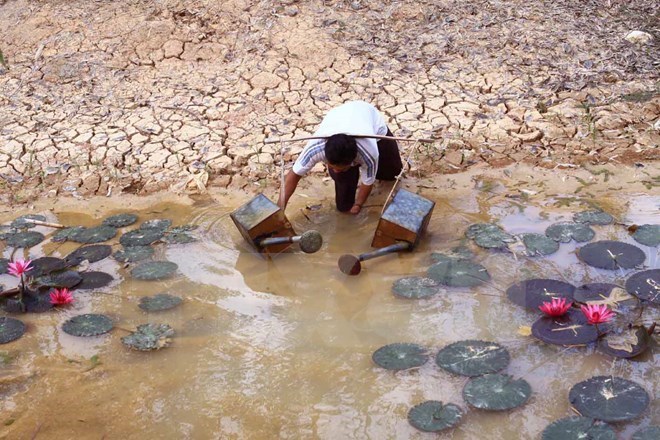 He put the problem down to impacts of the longest El Nino in 100 years and from dam construction for hydropower development on the upper stream of Mekong river, making it hard for fresh water to flow to the Mekong Delta.

He asked ministries and agencies to draft a diplomatic note urging China to flush part of their hydropower lakes to supply water to the Mekong Delta.

The State Bank was asked to work with commercial banks to waive interest rate on loans used for farming hit by the disaster and offer lending to hardy rice crops that are possible to cultivate.

Ministries, agencies and local authorities must align regional planning with the climate change scenario, while rallying public resources to battle with the disaster.

If the drought prolongs till June, nearly 500,000ha of rice will have to remain unsown, equivalent to over 40 percent of the total area of coastal provinces and 30 percent of the overall cultivation acreage in the region.

Minister Phat called on the government to offer financial assistance to 39 affected localities, including over 620 billion VND (28.1 million USD) to the Mekong Delta provinces, 50 billion VND (2.27 million USD) worth of fresh water supply to each locality, 215 billion VND (9.77 million USD) for seedling purchase and farming restoration, and 1.06 trillion VND for construction of facilities capable of fighting drought and saltwater creep.

According to the Deputy Minister of Planning and Investment Nguyen Chi Dung, the government has allowed the 2016-2017 State budget assistance under the Japan International Cooperation Agency, the World Bank and the French Development Agency’s Target Programme to Respond to Climate Change and Green Growth to be allocated to seawater intrusion prevention efforts, particularly in the Mekong Delta.