The government will continue paying close attention to agriculture and rural areas and create the best environment for their development, Prime Minister Nguyen Xuan Phuc said.

The government will continue paying close attention to agriculture and rural areas and create the best environment for their development, Prime Minister Nguyen Xuan Phuc said during a dialogue with farmers in the northern province of Hai Duong on April 9. 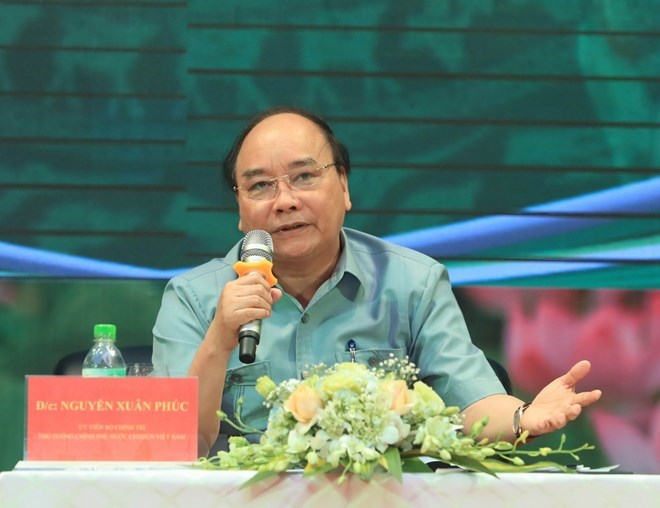 While highlighting the outstanding achievements of the agricultural sector in recent years, the PM said many questions remain unanswered, such as why 70 percent of the nation’s population live in rural areas and account for 43 percent of the workforce but contribute just 18 percent o the national GDP.

He said the Government and the people should join hands to remove difficulties for the development of agriculture and rural areas.

Addressing a farmer’s question on the repeated problem of dropping prices when there is bumper harvest, PM Phuc said while the government has strived to seek markets for Vietnamese farm produce for many years, farmers and firms should adjust production in accordance with market needs.

“Before sowing, farmers must think how much they will produce and to whom they will sell the products,” the PM said.

At the same time, he underlined the importance of the processing industry, and urged that firms would actively build processing plants to raise Vietnamese farm produce’s value.

In response to farmers’ concern about difficulties in selling high-quality farm produce as consumers are unable to make a difference between such produce and normal ones, Minister of Agriculture and Rural Development Nguyen Xuan Cuong asked agencies concerned to develop standards for goods quality, increase marketing and trade promotion to help consumers have more knowledge about good products, and support producers in building brand names.

As regards farmers’ difficulties in accessing capital, Deputy Governor of the State Bank of Vietnam (SBV) Dao Minh Tu said the main cause is the lack of transparent information on the intended use of capital. He pointed to the fact that many borrowers used capital in an inefficient way or for wrong purpose, leading to bad debts and forcing banks to tighten regulations on lending.

Deputy Finance Minister Huynh Quang Hai said the Finance Ministry granted 600 billion VND to the Farmers’ Support Fund – a unit of the Vietnam Farmers’ Union (VFU), last year and asked the PM to increase funding this year. He asked the VFU to allocate the sum to its units so as to ensure that loans will be provided in an effective manner.

In conclusion, PM Phuc stressed the requirement that agriculture must develop towards modernity and sustainability, large-scale commodity production with high productivity, quality and competitiveness, thus ensuring national food security in both immediate and long term. The development of rural areas must focus on building modern socio-economic infrastructure and stable society with rich cultural identity, improving living conditions for rural population, and protecting the environment.

The leader requested ministries, agencies and localities step up administrative and institutional reform, and improve investment environment in agriculture and rural areas.

The SBV, credit organisations and localities were required to make it easier for farmers and firms to access loans and reduce lending interest rates by 0.5-1 percent.

The government will open more channels to acquire public feedback and enable farmers to do their best to enrich themselves and the nation, the PM said.-VNA