Filipino Secretary of Foreign Affairs to visit Vietnam next week

Secretary of Foreign Affairs of the Philippines Teodoro Lopez Locsin will pay an official visit to Viet Nam from July 8-9, according to the Vietnamese Foreign Ministry. 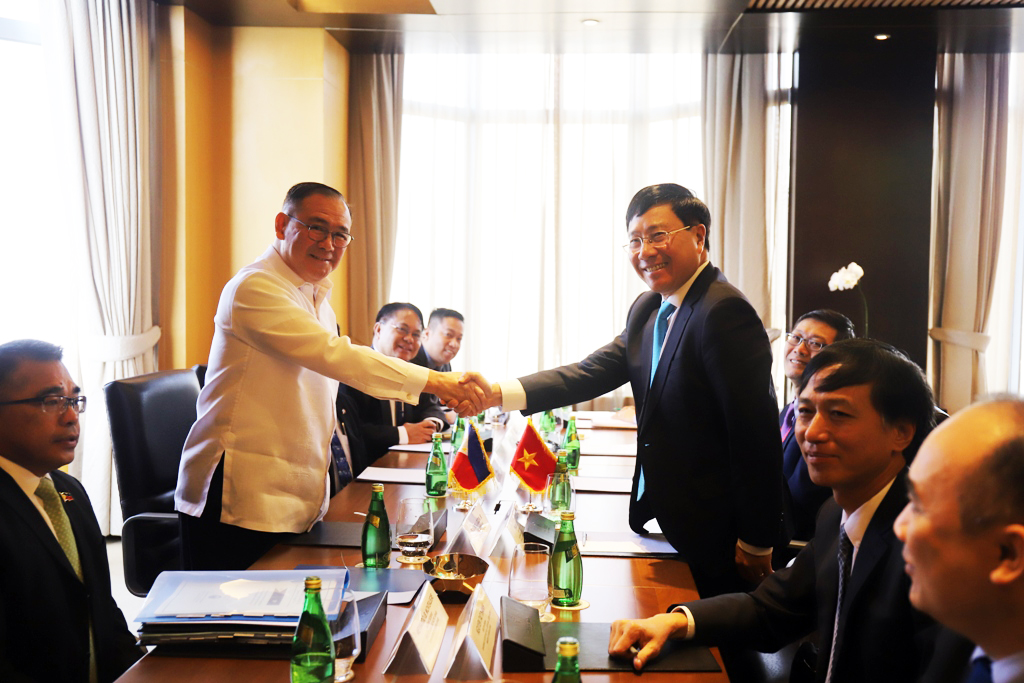 The visit is made at the invitation of Vietnamese Deputy Prime Minister, Foreign Minister Pham Binh Minh.

Last March, the pair co-chaired the 9th meeting of the Viet Nam-Philippines Joint Commission for Bilateral Cooperation in Manila, the Philippines, during which the sides agreed that political-diplomatic relations between the two countries have become increasingly deep and trusted as evidenced by the contents and outcomes of their visits and contacts.

The two FMs expressed pleasure that defense and security ties have been strengthened in an increasingly practical manner through information and experience exchanges as well as bilateral defense policy dialogues and consultations.

On multilateral aspect, the Philippine Secretary of Foreign Affairs congratulated Viet Nam on hosting the second DPRK-US Summit, emphasizing the significance of the event as it helps build trust, accelerate substantive peace talks on the Korean peninsula.

The two sides pledged to continue close collaboration at multilateral forums and work with other ASEAN members to beef up ASEAN solidarity and centrality over security and strategic issues in the region.

Vietnam and China defined major tasks in the time ahead to beef up their comprehensive strategic cooperative partnership in a sustainable way,

The European Union has mobilised a “Team Europe” package of over 800 million EUR (920 million USD) to support ASEAN nation in the fight against COVID-19.

China, Japan and the Republic of Korea (RoK) affirmed their support for ASEAN’s initiatives in promoting co-operation to respond to the COVID-19 pandemic at an online meeting of ASEAN+3 Senior Officials’ Meeting on Monday.

Nguyen Quoc Dung, Deputy Foreign Minister and head of SOM ASEAN of Vietnam, as the Chair of the ASEAN and the ASEAN+3 cooperation framework,

Fans have questioned whether the rapper's last-minute bid for the presidency is genuine.

A Vietnamese delegation, led by Ambassador Le Thi Tuyet Mai - Permanent Representative of Vietnam to the UN, the World Trade Organisation (WTO) and other international organisations in Geneva, Switzerland –

A patriotic intellectual in profile
POLITICSicon  21/07/2020

With extraordinary patriotism and energy, lawyer Nguyen Huu Tho overcame many temptations and the constraints of society at the time to become a leader of the South Vietnam liberation force,

As global cases rise by record numbers, EU leaders struggle to reach a deal on a recovery package.

US Attorney General William Barr has accused Hollywood and US tech firms of "collaborating" with the Chinese government to do business there.

Vietnam has a full legal foundation and historical evidence to back up its sovereignty claims over the Truong Sa (Spratly) and Hoang Sa (Paracel) islands and calls for all countries to respect international law.

The foreign ministry has urged overseas Vietnamese wishing to go home to be cautious and only rely on official channels to get tickets for repatriation flights.