Keeping the society safe against pandemics is the best way to ensure each member can fully enjoy their human rights.

That was the message from Vietnamese Deputy Prime Minister and Minister of Foreign Affairs Pham Binh Minh speaking during a High-level Segment of the 46th Regular Session of the United Nation Human Rights Council (UNHRC) via video conference on February 22.

Minh told the event that the COVID-19 pandemic had claimed the lives of millions, affected the well-being of billions around the world, and had strained public health and social security systems of all countries, triggering and exacerbating various human rights challenges.

However, "Vietnam continues to put emphasis on the protection and promotion of all human rights and fundamental freedoms of our people, even in this most difficult of times,” he said, adding that the country had tackled the pandemic head on, putting the people at the centre of all its efforts.

Prompt and determined actions had been taken to control outbreaks to protect the health and safety of the people as a matter of top priority. Efforts were also made to maintain economic growth and social welfare, to leave no one behind.

Thanks to the whole-of-government approach and the overwhelming support and solidarity of all people, COVID-19 had largely been controlled in Vietnam, Minh said.

He went on to say that the Vietnamese economy continued to grow at almost 3 per cent in 2020 and timely support had been given to businesses and people affected by the pandemic, especially vulnerable groups such as the elderly, women, children and people with disabilities.

“COVID-19 has left no country untouched," he said.

"No one can be safe until everyone is safe. As part of the international community, we are all in this together. Therefore, international solidarity and cooperation is critical to help us rise above challenges and move forward.”

Minh used the occasion to offer thanks for the valuable support from partner countries, international organisations, non-governmental organisations and people around the world helping Vietnam’s fight against the pandemic. He also shared that Vietnam had provided medical masks and supplies to support more than 50 countries and international partners in their response to the pandemic.

As proposed by Vietnam, the UN General Assembly adopted by consensus a resolution proclaiming December 27 as the International Day of Epidemic Preparedness to help raise awareness on the importance of preventing and responding to epidemics.

To further contribute effectively to joint efforts in protecting and promoting human rights, Vietnam presented its candidature for membership of the Human Rights Council for the term 2023-25, he added.

The UNHRC’s 46th regular session is taking place from February 22 to March 23 to discuss measures to promote and protect human rights in all civil, political, socio-economic and cultural aspects.

Speaking at the opening ceremony, chaired by President of the UNHRC Nazhat Shameem Khan, UN Secretary-General Antonio Guterres emphasised that human rights are the basis for connecting humanity, resolving conflicts and building sustainable peace and the UNHRC is the main global body to address challenges on human rights.

He said that the COVID-19 pandemic had exacerbated human rights challenges and seriously affected vulnerable groups. He called for joint action in priority areas of anti-racism, anti-discrimination and anti-xenophobia, and gender equality.

The role of journalists is indispensable for protection of human rights 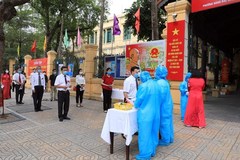