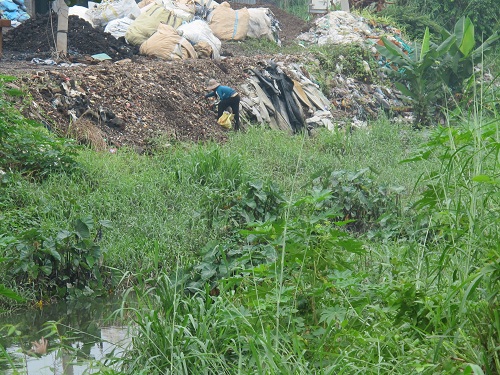 Residents in Hiep Phu ward in district 9 have complained for many years about the bad odor from Binh Tho Canal, which badly affects their daily life.

Nguyen Thi Tiem, a local resident, said she has to close the door and windows all day to prevent the bad odor.

The canal, two kilometers long, originating from district 9 in HCMC, is a ‘hot spot’ for pollution. The canal brings garbage and pollution from residential quarters to the Sai Gon River.

The HCMC People’s Council has requested agencies to take waste water samples from many different places to define the pollution levels and the polluting sources.

According to the HCMC Environment Department, there is one cluster of industrial workshops – Phuoc Long – and six other enterprises, mostly textile, dyeing, garment, footwear, fertilizer and veterinary medicine enterprises.


The Doi Canal, running through districts 7 and 8, is also becoming seriously polluted with black water and bad odor.

Nguyen Van Dung, a local man, said the canal in the past was so clean that Dung and his friends could catch fish there and have a bath. However, the littering by locals has turned the canal black.

Tran Quang Co Canal, located between Hiep Thanh ward of district 12 and Dong Thanh commune of Hooc Mon district, is in the same situation. The terrible odor comes from the canal section near Tran Quang Co Bridge, where there are dozens of pigs and poultry farms.

Besides, the scrap material yards along the canal sides from which garbage is thrown into the canal have also caused congestion.

Tran Van Tan, deputy chair of Dong Thanh commune, admitted that the canal has been polluted partially because of waste water discharged from pig farms, saying that local authorities had inspected the farms and asked households to build biogas tanks.

While residents in the districts of Go Vap, 12 and Tan Binh are obsessed by the polluted Tham Luong Canal, the people in Binh Tan, Tan Phu and Tan Binh districts, have been suffering from the 19.5 Canal. The pollution is also getting serious on the canals of Van Thanh in Binh Thanh and Nuoc Den in Tan Phu districts.

According to Nguyen Thi Thanh My, deputy director of the HCMC Environment Department, there are 2,000 kilometers of drainage canals, more than 100,000 manholes and 800 sewage drains.