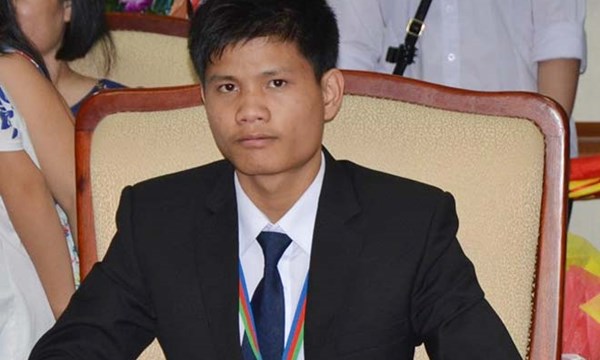 The excellent student was born into a famers’ family in a poor hamlet in Bac Ninh province. His parents’ several hundreds of square meters of rice fields and tofu shop help feed the family.

The student swore he would study hard to help the family escape poverty. He wants to study pharmaceutics at university.

Hieu admits that he did not choose chemistry to study initially. When he was in the 8th grade, teachers recommended that he move from math to chemistry.

Hieu ‘accidentally’ chose chemistry as his major, but he is passionate about the subject.

“I was very surprised when seeing a teacher who could change the color of a solution! Later, when I began learning chemistry, I realized that this was a kind of chemical reaction, and I felt that I really loved chemistry,” he recalled.

However, Hieu had to struggle to keep going to school, cherishing his dream of following chemistry studies.

Trinh Thi Thuong, Hieu’s mother, said her son had to take care of himself when he entered high school.

As the Bac Ninh provincial high school for the gifted was far from his house, Hieu had to stay in a rented room.

“Hieu returned to the home village every week,” Thuong said. “I gave him VND200,000 so that he could buy food and cover his basic needs. But he usually gave me VND100,000 back, saying that he did not need so much money.”

When Hieu felt homesick in the first months, he called his mother.

“Hieu only had VND20,000 a month for telecom services. I could not spend too much money on calls,” Thuong said.

Hieu’s passion for chemistry and learning have been well rewarded. One year ago, when he was an 11th grader, he won first prize at the national chemistry competition for excellent students.

And this year, he won the silver medal at ICO.

The gold medal went to Dinh Tuan Hoang from Ha Noi-Amsterdam High School for the Gifted.

The bronze medal went to Nguyen Thuy Hang from Hung Vuong High School for the Gifted in Phu Tho.