Despite being hard work, they are happy and proud to have more and more French friends, understand and come to Vietnam. 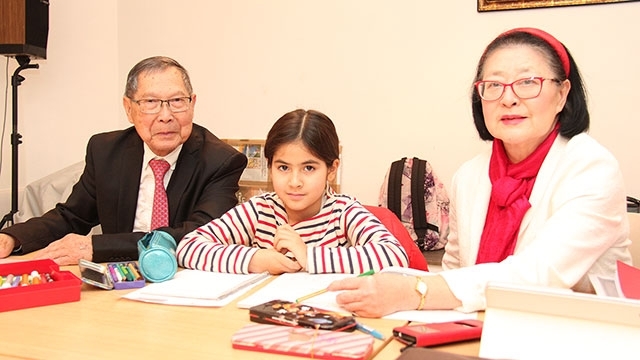 Can Van Kiet (L) and Can Anh Claudine (R)

Thanks to the profits from business activities, he established Vietnam House with the mission of maintaining business connections with the domestic market, while at the same time importing books, articles and handicrafts and organizing seminars on culture and photo exhibition.

Since 1981, Vietnamese launguage classes have been held at Vietnam House. From 1981 to 1997, Kiet did not directly teach Vietnamese, mainly focusing on business and making money for the activities of Vietnam House.

That's when the grandparents officially began to organise classes. So far, Can Van Kiet has had 522 students, aged 20 - 75, while Can Anh Claudine has had about 40 students.

There are many people who have studied for seven to eight years, who can not only read, write and speak Vietnamese fluently, but can also translate famous Vietnamese literary works into French.

Sharing about the goal of teaching Vietnamese, Kiet said: "For overseas Vietnamese children born and raised in France, I teach Vietnamese so that they can learn about their culture and language through words, proverbs and folktales. Therefore, they understand the customs of Vietnam and contribute to preserving the national identity. For the descendants of overseas Vietnamese, coming to learn the Vietnamese language is considered as a form of returning to their roots and understanding their relatives and the homeland of their parents. Learning Vietnamese is also a way to learn about Vietnamese people's traditional values."

Over the past eight years, Can Van Kiet and Can Anh Claudine have taught Vietnamese at the club-house of the Oversea Vietnamese Association in Paris, France, which is a familiar address for overseas Vietnamese and French friends alike.

Kiet said: "Teaching at home is fine, the place has many pictures and documents, especially pictures on Uncle Ho and Chua Mot Cot (One Pillar Pagoda) which are symbols of Vietnam. Therefore, learners will better understand the proud historical and cultural traditions of our country. My wife teaches children from 4 to 5 years of age about morality and how to behave in the family, at school and in society. For French people, in addition to learning pure Vietnamese language, they also learn about the country’s culture and history. In order to become their friends, it is necessary to introduce them to the history of our country as it will help them further understand Vietnam - a peace-loving nation, with very proud historical traditions.”

With more than 20 years of teaching Vietnamese, the couple have many unforgettable memories, such as the touching story about the filial piety of Jean-Jacques Picart, a Vietnamese expatriate whose mother is from Bac Ninh. He moved to France at a young age, and is now famous in the field of fashion in France.

Kiet recalled: “In 2010, Jean-Jacques Picart asked me for advice on how to pay homage to his mother at a ceremony to receive the Merit of the French State. I suggested to order a scarf in Go Vap and to memorize two Vietnamese sentences used in teaching children about being respectful to their parents "Mot long tho me kinh cha, cho tron chu hieu moi la dao con".

At the ceremony, with the attendance of nearly 400 people, he asked for permission to speak the Vietnamese sentences. His mother wore a long dress and a scarf, and she cried; the participants were very touched also. I am very happy and proud that a native of Vietnamese has the opportunity to speak to his parents in his native language. Such memories are always a motivation to help me in the process of teaching Vietnamese."

Visiting Vietnamese classrooms while the children are eager to learn Vietnamese phrases that are often spoken during Tet (Lunar New Year) holiday, from the door, it is not difficult to hear the songs to welcome Tet.

In 2003, Kiet was awarded a Certificate of Merit by the Foreign Minister for his outstanding performance in teaching Vietnamese and for preserving and introducing Vietnamese culture in France.

He said: "We are only small grains of sand in the history of the country, I always want the Vietnamese people here to preserve the homeland's language, and, at the same time, for the French people and the world to become friends of Vietnam". Nhan Dan