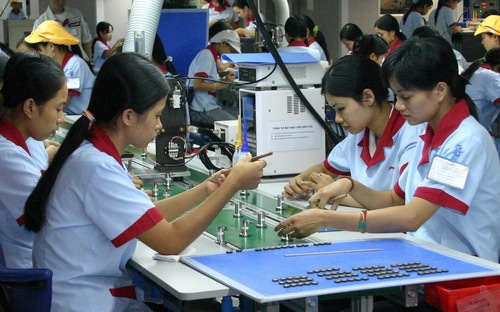 The Vietnam Labor Federation has suggested three alternatives for an increase of between 16 percent and 17.5 percent.

The federation is expected to have a meeting with the National Wage Council and the business community at the end of August to discuss the issue before a final decision is made.

If the minimum wage increases by 16 percent and all other types of expenses remain unchanged, the enterprises will see profits decrease by 25 percent.

With the minimum wage levels applied for 2015, Garment Company No 10 has to pay VND15 billion more for insurance premiums alone for its 7,200 workers, while workers have to pay VND4.85 billion more.

Meanwhile, since the beginning of 2015, garment companies have been facing big difficulties because of euro depreciation against the US dollar and the decrease in numbers of orders.

The director of a trade company in Hanoi noted that the current minimum wage policy is unreasonable.

He said that one worker now automatically receives VND3.5 million a month as stipulated by the 2015 minimum wage regulation even if they sit idle and do not create products. If the minimum wage increases, this will make laborers ‘lazier’.

The director warned that Vietnam should learn a lesson from Myanmar. As the minimum wage increased by twofold, orders left Myanmar for Vietnam and other countries, which caused thousands of workers to lose their jobs.

“The same scenario may happen with Vietnam,” he warned. “Foreign partners always consider the minimum wage tendency in Vietnam before they make decisions.”

Ninh Thi Ty, president of Ho Guom and Chien Thang Garment Companies, said if the minimum wage increased by 16 percent, the insurance premiums alone would increase by one billion a month.

She warned that any unreasonable minimum wage increase would lead to danger, especially when 70 percent of businesses do not make profits.