Vietnamese midfielder Nguyen Quang Hai has won the highest number of votes for the Iconic AFC U23 Goals title launched by the Asian Football Confederation (AFC). 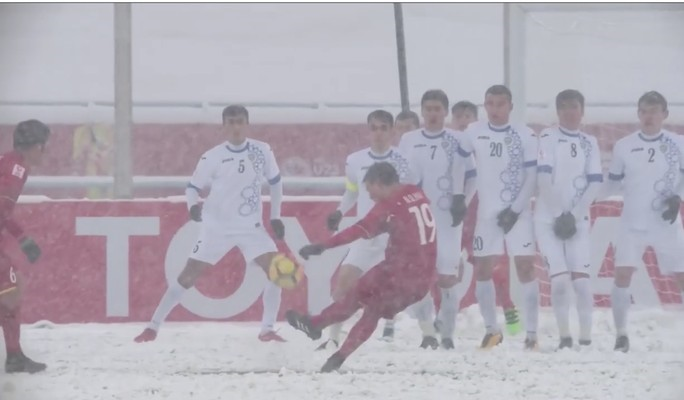 The goal by Nguyen Quang Hai (No. 19) in the AFC U23 Championship 2018 final between Vietnam and Uzbekistan wins the Iconic AFC U23 Goals title.

As the online voting ended after six days on December 22, Quang Hai’s goal finished top of the list with 1,159,847 votes. The number of votes for Quang Hai tripled that number earned by all seven other players in the list.

A strike by Iranian player Torabi in a match against China in 2016 came in second place with 298,037 votes.

The free-kick was scored by Quang Hai in the 41st minute of the AFC U23 Championship 2018 final between Vietnam and Uzbekistan in China, which helped Vietnam level the scores at 1-1. Despite great efforts and performance in the last minutes of the match, Vietnam lost 2-1 to Uzbekistan in extra time.

The AFC’s website describes Quang Hai's magnificent free-kick as the "Rainbow in the Snow".

A total of four Vietnamese footballers, including Quang Hai, Van Hau, Hung Dung, and Ngoc Hai, have been selected in a line up of the best ASEAN team of 2019, as announced by Foxsports Asia.

National midfielder Nguyen Quang Hai is one of the top 24 nominees of the Best Footballers of Asia 2019 award held by China's Titan Sports newspaper.