Yet aside from the pros, it has its cons which are deforestation, population resettlement and adverse effects on the natural aquatic environment, to name but a few. Human impacts on nature concern both sides of a coin. Therefore, planners have to weigh pros and cons to pick the option that offers the best plus and the smallest minus, and minimize negative impacts on the environment. 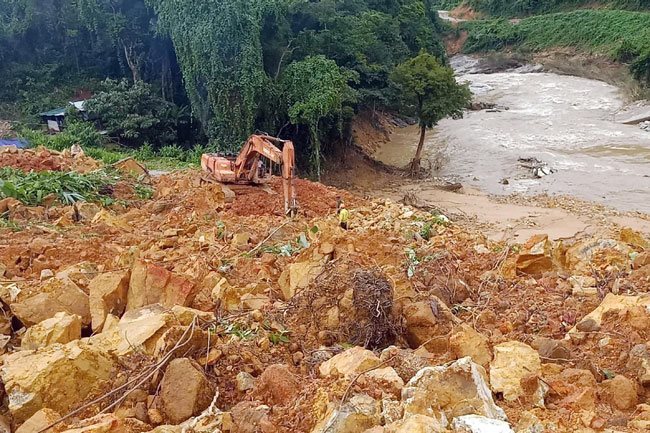 Environmental effects of hydropower projects began to capture public attention some time ago when small- and medium-size hydropower plants mushroomed in many provinces while ignoring the awareness of environmental protection and deforestation. In these cases, hydropower project developers failed to replant forests they had promised, destroyed more forests, caused downstream water resources to drain and demolished multiple local ecosystems.

The accident at the construction site of Rao Trang 3 Hydropower Plant earlier this month has left 30 killed or missing, including a military rescue team of 13 members.

Scientists have for long warned against the downside of small hydropower plants, from the point of view and policies to regulations and implementation.

Rao Trang 3 Hydropower Plant was licensed by the People’s Committee of Thua Thien-Hue Province in November 2008. The construction site of the project is on the Rao Trang River, a tributary of the Bo River, in Phong Xuan Commune, Phong Dien District. The project’s proprietor is Truong Son, a construction consultant. Rao Trang 3 has a designed capacity of 11MW on a planned area of 11.1 hectares, of which the area of the reservoir bed is 8.8 hectares.

In a tropical monsoon climate country which is still poor like Vietnam, storms and floods are frequent while natural calamities are devastating. Although the State has gained experiences and taken measures to cope with them, the problem remains serious.

As an American proverb goes, “The forest is the poor man’s overcoat. Thua Thien-Hue Province is no exception. The localities in the Central Highlands and the northern mountainous region, hydropower projects have resulted in deleterious consequences.

Reality in Vietnam has indicated that overexploitation of small hydropower plants means not only upsetting the geological and ecological balance but also destroying centuries-old heritages of local ethnic minorities. Hydropower planning has severed river deltas, devastated forests only to give birth to dead rivers, and destroyed riverscapes and waterfalls.

Risks of landslides have been warned

As hydropower plants may be lucrative, investment is attractive even to enterprises which are from other sectors not related to power generation. However, such profit must be exchanged for the ruin of social and natural environments.

With a length of less than 30 kilometers, the Rao Trang River has to shoulder four hydropower plants whose total capacities are 89MW. This overexploitation partly reveals incongruities of upstream hydropower generation planning in Thua Thien-Hue Province.

The Institute of Geosciences and Mineral Resources under the Ministry of Natural Resources and Environment has once issued warnings about high risks of landslides and rockfalls in the environs of Rao Trang 3 Hydropower Plant. What’s more, it also involves dangers of rugged terrains.

The institute’s vice director, Dr. Trinh Xuan Hoa, said in 2019, his institute conducted a survey on landslides in Phong Dien District, including the area of Rao Trang 3 Hydopower Plant. Hoa said the survey showed that at all the sites, landslides occurred when a rain came down or followed a prolonged heavy rain. According to statistics, 40 out of 42 landslide sites were on the manmade talus, the sloping side of an earthwork that tapers to the top.

“High risks of landslide and rockfalls have been warned against the main site of A Lin 1-Rao Trang 3 Hydropower Plant,” said Hoa. “It was suggested that a detailed survey of landslide at the scale of 1:25,000 should be carried out. A map of zoning landslide/rockfall risks will be made in 2021.”

Notably, in June this year, the team undertaking the project “Examination, Evaluation and Zoning of Risks of Landslides/Rockfalls in Vietnam’s Mountainous Area” handed over the results to the Thua Thien-Hue Committee for Search and Rescue.

From the above information, more details should be worked out about (1) whether the Environmental Impact Assessment (EIA) report of Rao Trang 3 mentioned the warnings made in 2019?; (2) If the report had been made prior to 2018, why did not Rao Trang 3 Hydropower Plant take any action to respond to those warnings?; and (3) A proposal was made to conduct a survey on landslides at the scale of 1:25,000, and ever since, whether this suggestion has been considered? If the answer is “no,” then why should nobody take any measures to respond to such an important proposal? If the answer is “yes,” then what has been made and what are the results?

Submission of the EIA report does not mean “end of story”

The above three questions do not mean to find fault with somebody. They are just to make clear what has really happened and draw a lesson for the future.

The fatal accident at Rao Trang 3 Hydropower Plant suggests that the submission of the EIA report does not means the parties involved have fulfilled their responsibilities. Sponsors of some official development aid projects require not only EIA reports as stipulated in Vietnam but also ask for a subsequent environment study which must include updated environmental information and suggest measures to manage the environment in line with the proposals in the EIA report and other proposals. The environmental references of the project in question must be updated each time new information is available and the project’s environmental management system must be revised in accordance with updates.

If Rao Trang 3 Hydropower Plant had conformed to the above procedures, the heart-rendering accident involving 30 deaths could have been avoided. Therefore, it is time to have stringent regulations on the post-EIA report tasks. Although risks of accidents were indicated, no measures were taken, or measure taken belatedly and unprofessionally.

Obviously, in addition to benefits already known, Vietnam’s networks of hydropower and irrigation projects may pose more risks to those projects themselves but also the surrounding areas.

That’s why the tasks of research and planning should be adequately paid attention to in order to ensure sustainable development and avoid overreliance of companies’ suggestions.

Small hydropower projects are often located in remote or mountainous regions, where rough terrains pose high risks of landslides during the rainy season. Consequently, ample safety measures must be taken to ensure safety.

Natural calamity prevention and fighting in Vietnam has been considered a struggle for existence, which is a tough job. It is therefore necessary to have well-trained rescue teams, accurate early warnings and specialized equipment ready for accidents at any time.

The lethal accident at Rao Trang 3 has clearly shown that the situation of small hydropower plant projects is currently chaotic. It is a bitter lesson we should learn.