In the Mekong Delta, which is called the ‘wildlife animal metropolis’, turtles are bought for food and pets. Meanwhile, in the north, red-book turtles are collected by merchants to make animal bone glue. 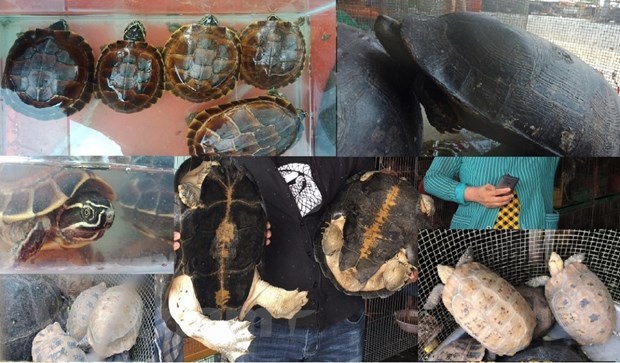 D is very well known in the north for his tens of years of making bone glue from red-book animals. In a conservation with reporters, D carefully instructed how to choose turtles and prepare necessary materials.

“You need to prepare keeled box turtle (Cuora mouhotii), one hawk and 0.1-0.2 taels of black opium. Only turtle shells and their four legs are needed to prepare bone glue. The fee for making glue is VND1.5 million,” D said via phone.

“Twenty kilograms, or 30-40 turtles, are enough for one pot,” he said, adding that turtles used for making glue must be mountain turtles.

“Mountain turtles are rare and catching turtles is banned. What if state agencies discover the preparation of turtle glue?” a reporter asked.

“If inspectors discover the pot of glue, I will say this is horse bone glue,” he explained.

D reassured the reporters that he has been making glue for tens of years and has good experience. “I make tens of pots of glue every year,” he said.

In Bac Kan province, where there are many customers of D, reporters met the owner of a shop selling turtle bone glue. He affirmed that the glue is very good for human heath, and that it can treat osteoarthritis, stomach disease and even cancer.

“Can you provide turtles in large quantity?” reporters asked. The owner of the shop told reporters to meet T in Cho Ra Town.

N, the sister of T’s wife, showed reporters two plastic bags containing turtle glue and said the glue was made by her family. She told reporters to buy the glue as soon as possible, because ‘turtles are carried away to China and they are running out’.

Reporters found that the turtle species used to make glue in Bac Kan are hunted by illegal poachers in Ba Be National Park and Tat Ke – Ban Bung Natural Reserve. The poachers hunt turtles with dogs. When meeting turtles, they will bark and hunters just need to go there to pick up the turtles.

Bui Thi Ha, deputy director of the Center for Nature Education, after seeing the pictures provided by reporters, affirmed that the turtles used to make glue were keeled box turtles, belonging to IIB Group in Decree 35.