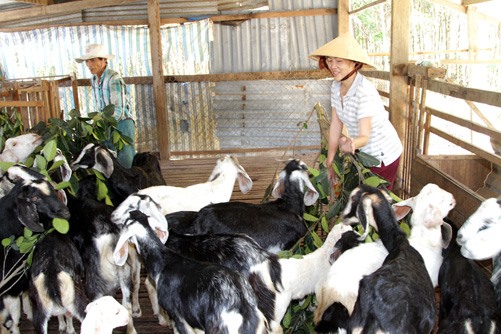 These districts have developed especially in terms of infrastructure construction and production, contributing to raising the living standards of local ethnic groups.

According to a recent report of the Tay Nguyen Steering Committee, in 2016, the districts focused on planning, using land to its potential, converting plant structure and bringing technological advances to production to increase crop yield in areas with ethnic groups.

In 2016, despite unfavourable weather, the value of agricultural production in the districts bordering Tay Nguyen area was up 7.7 per cent compared with 2015. Some key crops such as rice, maize, cassava, and coffee, as well as pepper, rubber, cashew all increased, with over 71,000ha of rice, producing an average yield of 3.5 tonnes of paddy per hectare; over 116,800ha of cashew; nearly 12,000ha of coffee; and more than 41,300ha of rubber.

Last year witnessed an investment into husbandry in these districts with 1.4 million cattle.

In 2016, the districts invested in building 276 rural road projects, irrigation works, national power grid and water supply facilities. Currently, up to 94 per cent of villages and hamlets have access to the national power grid. Of these, districts in Phú Yên and Khánh Hòa have had all connected to power grid.
Over 96 per cent of communal medical stations in the districts have doctors. The whole region has created jobs for 56,000 workers and provided vocational training to 35,000 people.

Thanks to the positive measures, in 2016, the average income capita reached VNĐ17.6 million (over US$780), an increase of 9.5 per cent compared with 2015, while the poverty rate decreased on average 3.8 per cent per year.

However, according to the Tay Nguyen Steering Committee, the districts’ production has yet to match the potential. Forestry is strong but still underdeveloped. Poverty reduction still faces difficulties and is unstable.

The committee recommended the government and the prime minister allow districts to apply all special mechanisms and policies such as in the Central Highlands.

At the same time, the State was asked to have special preferential policies to encourage organisations and individuals to invest in the development of production, business and services.

The Ministry of Agriculture and Rural Development is collaborating with other ministries, sectors and provincial people’s committees in the region to build a master plan for the investment and development of agricultural production and forestry and to implement policies to encourage forest protection and development in association with the processing industry and product sales, the Tay Nguyen Steering Committee said.