Many retailers have left apartment buildings where they had done business for years. Some shophouses on the first floor of buildings are deserted and dark in Hanoi at night. 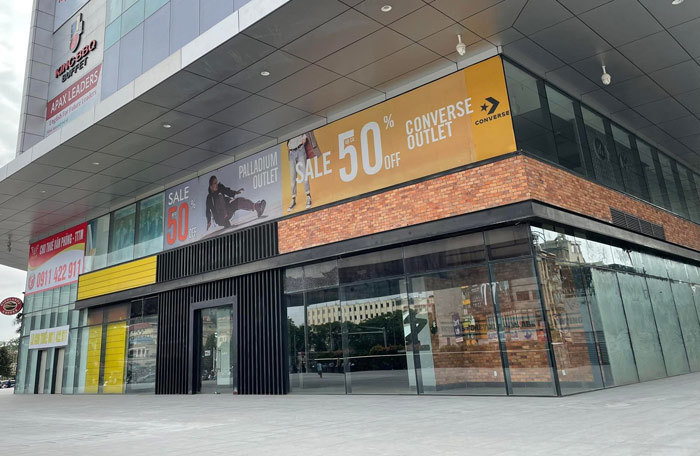 A convenience store at an apartment building in Linh Dam new urban area has shut down, though the leasing contract still had a few more months. Because of the pandemic, the retailer has to restructure the retail chain and shut down the sales point after five years of operation.

Local residents said there is no longer a convenience store to buy essential goods.

Prior to that, a clinic on an area of hundreds of square meters nearby also shut down. A coffee trader said he would leave if he failed to renegotiate the rent with the landlord.

The row of shophouses nearby, once seen as a potential gold mine, are standing in silence. Passersby can see broken chairs, building materials and waste lying about in disorder and inside through the windows. Some shophouses are unlocked because they are empty.

Thu Thuy, a Linh Dam resident, said one year ago, the shops were always bustling and bright. But now they are closed, especially in the evening.

Linh Dam was a busy commercial hub thanks to the population, where retailers all wanted to set up shops. This explained why the retail rents were always sky high, which put pressure on tenants. So they left immediately when consumer purchasing power decreased.

The same situation can be seen at many suburban apartment buildings. Many shops on the first floor of the buildings have closed and some buildings don’t have any shops open.

Tham, a resident in Trung Van of Nam Tu Liem district, complained that as convenience stores have shut down, she has to drive a longer distance and spend more time to buy food and essential goods.

“I hope they (retailers) will come back when the pandemic ends. The residential quarter is now too quiet,” she said.

Retail premises are also deserted in inner districts of the city. At an apartment project on Truong Chinh street, the ads for leasing retail premises hang on half of the first floor. Prior to that, the apartment had attracted many coffee, fast food and fashion brands.

The departure of retailers has affected the income of landlords. They have had to slash rent by 20-30 percent or even 50 percent.

Shophouses left idle for half a year as retailers suspend business

Shophouses, which are considered ‘money spinners’, have been unused for many months amid the impact of the pandemic. They cannot be sold or leased.

The ‘war of nerves’ between landlords and tenants