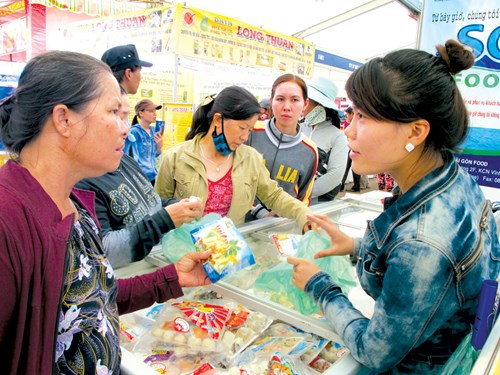 A report by Nielsen shows that the market growth rate in rural areas in the first quarter of 2017 reached 12.4 percent, making up 51 percent of total revenue of fast-moving consumer goods, while the growth rate was just 6.5 percent for urban areas.

BSA (Business Study and Assistance Center) pointed out that the rural market has high potential with high purchasing power. All the Vietnamese goods Market Days organized by the center have been successful. The 11 market days organized in the first six months of 2016 attracted 135,000 visitors.

In July 2016 – April 2017, BSA joined forces with local authorities and organized 70 trade fairs in rural areas, including 50 in the south and 20 in the north. The sales at all the trade fairs were far beyond BSA’s and businesses’ expectations. More rural consumers want modern goods.

A survey by Kantar Worldpanel in late 2016 shows that the average income of one 4-member household in rural areas is around VND7 million, while the figure is VND16 million in urban areas. However, the average spending for every shopping trip in rural areas is VND60,000, equal to 60 percent of urbanites.

Kantar Worldpanel’s report released in May 2017 show that the rural market grew by 31 percent over the same period last year. Rural residents made 138 shopping trips a year while urban residents made 158.

Both urban and rural consumers now like convenience when buying goods and they tend to seek goods from different channels in order to have the best prices.

Tan Quang Minh Company with the Bidrico brand has been cited by BSA as a typical success story in the rural market. While sales in rural areas only account for 20-25 percent of total sales to other businesses, the proportion is 70 percent for Bidrico.

In 2010, the total sales of Bidrico were VND589 billion, of which VND380 billion was from rural areas. After reaping fruit in the rural market, Bidrico began conquering the urban market.

Nguyen Dang Hien, CEO of Tan Quang Minh, said the competition in the rural market is not as stiff as it is in urban market, while the selling prices of Bidrico products fit consumer products.

He also noted that while urban consumers regularly change the products they use, rural consumers are more loyal.

My Hao, a cosmetics brand, has been selling well in the rural market which brings 80 percent of its total revenue, according to Luong Van Vinh, its CEO.