According to Hoang Van Bay, head of the Water Natural Resources Agency, the depression in Mekong Delta is ‘extremely complicated’. 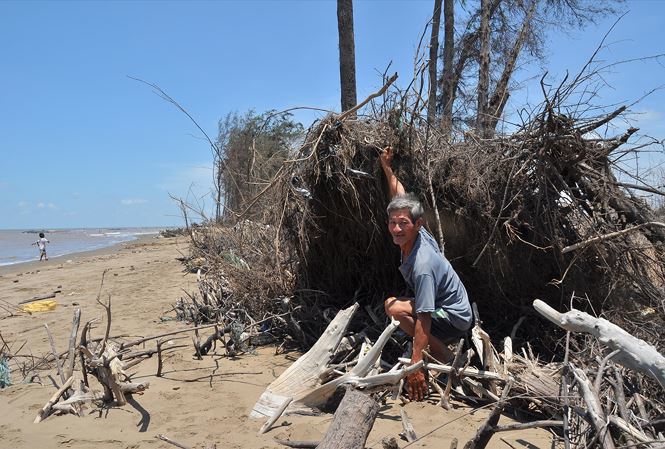 The most seriously depressed areas were seen in 9 cities/provinces, especially in Bac Lieu and Ca Mau.

In An Lac area of Binh Tan district, HCMC, 81.4 percent depression was found in some places. In the last 12 years, Ward 1, Bac Lieu commune subsided by 62.6 centimeters, while Vinh Hai and Vinh Chau Town in Soc Trang province by 53.1 centimeters.

According to Tran Quang Hoai, general director of the Natural Disaster Prevention Department, floods are the means of subsistence of Mekong Delta, but the floods have changed a lot in recent years and tend to come later.

In pre-2010, the peak of flood season came in late September or early October. But since 2010, it is in mid-October. The number of big floods has decreased, while 90 percent of floods are small and medium size. Small floods bring few benefits.

Hoai went on to say that saline intrusion now tends to appear 1.-1.5 months earlier. Previously, saline introsion encroached on the mainland by up to 60 kilometers, but nowadays, the figure is 90 kilometers.

In El Nino in late 2015 and early 2016, nearly 53,000 hectares of rice fields cultivated on shrimp farming area were damaged because of saline intrusion.

More than 43,000 hectares of cajuput suffered from drought, and the transport infrastructure witnessed subsidence and landslides with 112 kilometers broken. More than 12,000 households lacked water for daily life. A lot of poor households had to leave their home village.

In addition, hydropower dams on the upper course of Mekong River and unreasonable policies on economic development are also problematic.

All of these factors have had negative impact on the local economy. As the old farming regime is no longer suitable, the Mekong Delta has had to restructure the agriculture production.

Nguyen Huu Thien, talks to the newspaper Thanh Niên (Young People) on the eco-system in the Mekong Delta and threats from climate change.

Mekong Delta to have quality breed sources for fishery, fruit and rice

The Ministry of Agriculture and Rural Development has implemented several measures to develop the best breeding sources to produce seeds for the delta’s fishery, fruit and rice sectors by 2025.