A nod to the history of IT in Vietnam

A 25sq.m room in a busy residential area in Hanoi owned by a 70-something researcher serves as a museum offering a close look at the history of information technology (IT) in Vietnam.

It is the country’s first-ever exhibition hall for technology and was the brainchild of Nguyen Chi Cong, former head of the Science and Technology Department at the Vietnam Informatics Association. 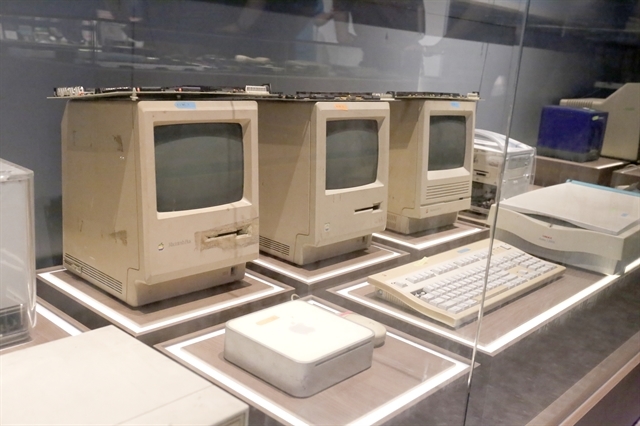 The museum displays 300 or so objects and images of the nearly 1,000 Cong has in his house, dating back dozens of years and used as Vietnam advanced in terms of technology.

Objects cover three development fields in IT: electronics, informatics, and the transformation in telecommunications from analogue to digital.

Cong’s museum highlights remarkable periods in the development of IT in the country.

Noted individuals to have made considerable contributions in the field, such as professors Ta Quang Buu, Phan Dinh Dieu, Nguyen Dinh Thanh and Vu Dinh Cu, have been acknowledged at the museum for forming and developing IT in Vietnam.

Since its opening early this year, the museum has hosted dozens of seminars on informatics for students and researchers.

“I hope the museum not only record the milestones in development but also hand down a passion for technology to young people,” Cong said. “Our next generation will see that Vietnam was not slow in IT development compared to the world, as we applied technology early on.”

His museum will continue to display memorabilia dating from the year 2000 and will digitalise the materials and objects on display to create “online visits”.

As a senior expert in the field, Cong said he has kept many objects since the 1960s.

“I like history, and I visit museums wherever I go,” he said. “I think we can establish a museum like in other countries. We have many objects that are even much older.”

“Vietnamese people are not so interested in history, but I kept memorabilia so that the next generation can understand the history of IT in Vietnam.”

Among the oldest objects in the museum is a book published in Hanoi in the late 1960s, the first on computers and programmes and written in Vietnamese by Prof Nguyễen Bá Hao and his colleagues. The book was compiled during the American air war of destruction against North Vietnam.

There are also books by Prof Duong Quang Thien published in the 1980s, when the country was facing difficulties resulting from the US embargo. The books are mostly on information systems for enterprise management.

After sharing the opening of the museum on his Facebook page, Cong received great support from friends, students, and even some sponsors.

Entry to the museum is free to anyone interested, provided an email is sent beforehand to conotos@gmail.com. Cong himself may be the guide.

Nguyen Thanh Nam, former CEO of the FPT Group and now principal of the FUNiX online university, expressed his appreciation of the museum.

“Thousands of pieces of hardware and software, books, and images marking the milestones in Vietnam during the development of IT around the world are brought to life at the museum, where Cong acts as director, restorer and guide,” Nam wrote on his own Facebook page.

Cong’s hobbies since childhood have been collecting stamps, paintings, and old books.

He was born in Dong Tac Village in Hanoi to an intellectual family. His father, Nguyen Huu Tao, was a teacher, and his grandfather, Thieu Chuu Nguyen Huu Kha, a scholar.

Cong said he was surrounded by old books as a small boy.

Over time and in the midst of war, his family’s assets were nearly lost.

Cong was sent to then Czechoslovakia to study IT after finishing high school in Hanoi.

When he returned home he worked at the Institute of Counting and Controlling (today the Information Technology Department of the Vietnam Science Academy). He has maintained a love of restoring old materials and objects.

“Each object is evidence of a period of history, when the country began to renovate and science and technology were applied in daily life,” he said.

In the 1980s his family’s small room was full of machines, most of which are still working today. His wife, though, wanted him to throw it all out. He didn’t.

Instead, he built a four-story house on the land and began to think about establishing a small museum on the history of IT in Vietnam.

Visits to private museums gave him an idea of what was required.

Not many people know that Cong was among the pioneering researchers in making the first personal computers in Vietnam in 1977.

“I want to emphasise that we should be confident that the capability and creativity of Vietnamese people are no less than other peoples,” he said.

He also regretted that a Soviet-made computer called Minsk-22, which was as big as a room and used by staff at the State Science and Technique Commission (now the Ministry of Science and Technology) at 39 Tran Hung Dao Street in Hanoi, and a computer called Odra-1304, in a bomb shelter in the capital’s Lieu Giai Street, have both disappeared, with nothing of them ever found.

The only thing on display at the museum is separate printed circuit boards for computer VT81.

He has gathered many chips of circuit boards from France, while his colleagues bought other parts in Vietnam.

Many other things from France came back with him when he returned in the 1980s, including the first Macintosh computers from Apple, with a nine-inch screen.

He now plans to capture the objects using 3D technology, so that people can visit the museum online.

Recruitment demand in IT industry quadruples