Deputy Minister of Agriculture and Rural Development Nguyen Hoang Hiep in an interview with Dan Viet cited many reasons behind the increasingly serious situation in Mekong Delta. 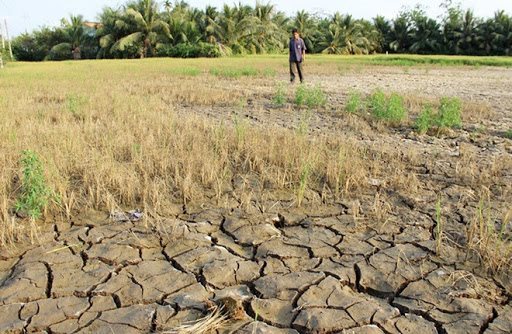 The development of hydropower dams in the Mekong upper course has had an adverse impact on the Mekong Delta. The biggest problem for agricultural production is the water diversion by countries in the upper course.

As a result, little water can flow to the lower course, worsening saline intrusion and landslides.

But big floods are no longer coming to the Mekong Delta. When alluvium doesn’t come to the delta, the river flow will change, causing river and coastal bank erosion.

Scientists say if all of the hydropower plants on the Mekong River were operating, the volume of alluvium reaching the delta would drop to only 5 percent.

If the amount of alluvium is thick and heavy, it becomes a shield to prevent the waves hitting the shore, thereby limiting erosion.

If there is no more sediment, the river flow will change, which will generate swirling holes that cause landslides.

The absence of sediment means that useful microorganisms and phytoplankton are blocked and cannot reach the delta. Aquatic resources then disappear, affecting the livelihoods of people.

“In other words, without floods, the identity of the delta will no longer exist," Hiep said.

In an effort to use the Mekong’s water most effectively, the Mekong River Commission (MRC), comprising four member countries, including Cambodia, Laos, Thailand and Vietnam, was set up.

The Mekong-Lancang Cooperation (MLC) mechanism has also been set up by six countries along the Mekong, namely Vietnam, Cambodia, Laos, Myanmar, Thailand and China.

The member countries have the responsibility of exchanging and sharing information, and discussing solutions to exploit the resources of the Mekong in the most effective way.

According to Hiep, member countries have the right to use the river sections flowing through their territories, so Vietnam needs to be flexible but methodical when discussing with member countries the need to minimize water diversion to reduce negative effects to its Mekong Delta region.

The Centre for Environment and Community Assets Development (CECAD) and the Finnish Embassy in Vietnam have signed an agreement to fund a project improving communications capacity to cope with climate change in the Mekong Delta.