Experts have warned that if there is no solution to deal with the oil spill, the environment will be polluted and the underground water will be affected. 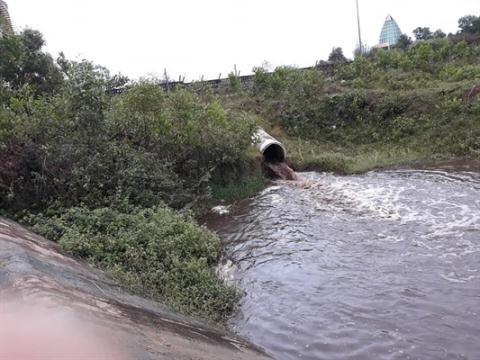 According to Phung Chi Sy from ENTEC (the Environmental Technology Center), the plant uses fresh or dried cassava to make alcohol. It is necessary to ferment materials, then distill and extract essences to make industrial alcohol. The residue created during the process, the draff, is very polluting.

Alcohol is mixed with petroleum to create E5 and E10. Fusel oil is also a kind of solution extracted from ethanol.

In principle, producers must apply necessary measures to prevent incidents for alcohol/draff and fusel tank. There must be surrounding walls, so that oil won’t spill over in case of incident.

The causes of the fusel oil spill are still being clarified. However, Sy thinks that this might be because of the break of the pipes or tanks it could be due to broken pipes or tanks. As the safety measures were not followed strictly, the oil has reached the environment.

Sy warned that the environment will be polluted by organic waste. Like alcohol, fusel oil will get dissolved in water, which is not like gasoline which can be salvaged.

In case of accident, the organic matter content of BOD, COD will increase and decompose, leading to exhaustion of dissolved oxygen in water, causing fish and shrimp to die. During the decomposition of organic matter, it will produce bad odor, and plant leaves infected with the fluid will get scorched. The risk of an explosion is unlikely to occur, but a fire is possible.

In particular, the spilled fusel oil seeps into the groundwater and causes disease outbreaks.

Since the solution is soluble in water, Sy believes that the best solution for now is preventing the continued fusel oil slick. Theoil will decompose after a period, or people can take measures to accelerate the decomposition process.

Some meetings between the owner of the ethanol plant and local people have been organized, but it has been at a standstill to date, while there has been no result of environmental monitoring.

On October 2, Pham Van Tinh, deputy director of Tung Lam Biofuel, told the press that the company has reported to the Quang Nam provincial authorities solutions to deal with the incident. However, since people have blocked the entry/exist to/from the plant, the plant has stopped operation since September 20 and everything remains immovable.

The coal-fired power plants in the region are believed to be a main contributor to the increased pollution in HCM City.