Experts have repeatedly expressed their concern about the uncontrolled sand exploitation in Mekong Delta. 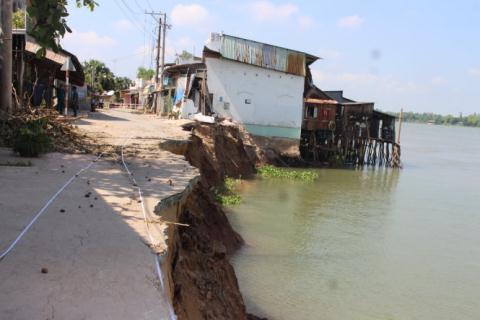 This has caused the loss of sand in the lower course, the lowering of river bed and changes to the current, thus aggravating the problems that Mekong area faces, especially landslide and subsidence.

According to Dinh Cong San from the Southern Institute of Water Resources, in 2010-2013, the institute implemented a scientific research project on studying the impact of the sand exploitation activities on the currents of Tien and Hau Rivers (the two tributaries of Mekong).

The research team counted all the licenses for sand mining on Tien and Hau Rivers granted by the local departments of science and technology, natural resources and the environment, and construction to sand mining enterprises. The total volume of sand was up to 28 million cubic meters a year.

28 million cubic meters were just the figure shown in licenses. Meanwhile, the real volume of sand exploited must be higher.

Some provinces could see the harmful impacts of the sand exploitation and stopped licensing the exploitation. Can Tho was one.

The scientists found that only several million cubic meters of sand flowed to Mekong Delta a year, which is much lower than the volume of sand exploited,” San said.

The expert affirmed that each river section needs to have stable depth. In case the depth changes because of the sand overexploitation, this will cause a threat to the river section and other areas.

Vietnam prohibits exporting sand, but illegal export continues. It is still unclear the level of illegal exports. San believes this is not a big figure.