Vietnam’s nuclear engineering is used in traditional fields but also in organic agricultural development, farm produce origin tracing, and others.

Nuclear engineering is also used to treat water and soil pollution, according to Tran Chi Thanh, head of the Vietnam Atomic Energy Institute. 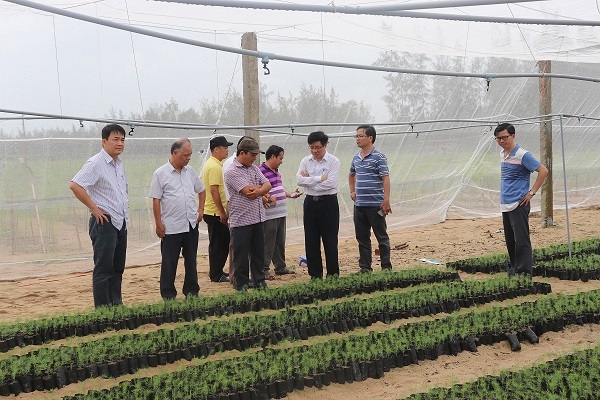 Radiation technology is used in producing organic fertilizer and TE fertilizer that can help farmers solve many problems, such as making the best use of by-products from aquaculture and seafood processing activities, avoid pollution to the environment and restrict the uncontrolled use of inorganic fertilizers, thus improving the quality of products.

Vinatom met the representatives of the Mo Duc district People’s Committee in Quang Ngai province, the locality wanting to develop organic agriculture models, but still cannot do this because the soil quality is depleted and aquatic farming ponds are polluted with livestock feed.

In November 2019, Vinatom and the district’s local authorities agreed on the implementation of the first phase of the cooperation project with three experiment models – using TE fertilizer and oligochitosan for asparagus and aloe vera; using rare earth organic complex substance to improve the growth and disease resistance capability of aquatic products; and applying solutions to treat water pollution in aquaculture.

If succeeding, the two parties will implement the second phase, the foundation for building product supply chains and cooperation links between Mo Duc and the enterprises in the province and other localities.

In 2000, Vinatom established the Research and Development Center for Radiation Technology (Vinagamma) which became one of the first units in Vietnam that provided fruit radiation service.

“This led to the establishment of a new sector which satisfies the requirements of many fields. Vinatom plays a very important role in Vietnam’s achievement of exporting 41.3 billion worth of farm, seafood and forestry products today,” said Nguyen Cong Tac, Deputy Minister of Science and Technology.

In its development path, Vinatom has been exploring new directions.

Vinatom put the horizontal neutron channel No 1 of the Da Lat Nuclear Reactor into operation to ensure neutron storage. Da Lat Reactor has four horizontal channels and this is the first time the No 1 channel has been exploited. In the past, it could not be done because there was no spectrometer to exploit the thermal neutron stream.