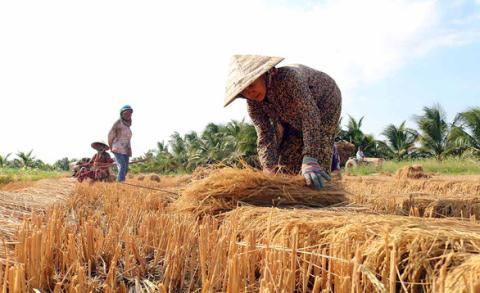 Local authorities are seeking the government’s permission to build more reservoirs to store freshwater. Some experts believe that it is necessary to utilize modern technology to turn seawater into freshwater. Others have suggested leading water to the Mekong Delta through a transmission network.

Duong Van Ni, director of the Hoa An Biodiversity Research and Experiment center, said the solutions can help, but cannot solve the problem.

According to Ni, there are three major problems that need to be addressed.

First, the local people’s preparation on the spot.

Second, local authorities at different levels need to program concentrated clusters of population and select technical solutions to provide freshwater to every cluster.

Third, the central government needs to program the development for different zones. There must be rice growing areas to ensure food security. Meanwhile, farmers in other areas can shift to other crops or livestock.

The government, in its Resolution No 120 on solutions for the sustainable development of Mekong Delta, pointed out that freshwater, brackish water and saltwater are all natural resources which can serve economic development.

In the past, all the measures applied just aimed to prevent saltwater and store freshwater to serve rice and crop cultivation.

However, Ni noted that it will take time to change the viewpoints of ministries, branches and local authorities.

At present, local farmers are seriously lacking freshwater. However, Ni believes it is not difficult to deal with the problem. Local people for hundreds of years had the habit of storing water in tanks and jars.

In the Mekong Delta, there are areas where the rainfall is up to 2,000 mm a year. So, each household just needs to store water in tens of jars and tanks to have enough water for use during the 3-4-month dry season.

According to Ni, the most important solution is for local authorities to re-plan the development of clusters of population and design specific water supply solutions for each cluster.

For example, if a cluster of population is located close to the sea, digging lakes and ponds to store freshwater is not advisable. The solution in this case wouldbe to build a plant that converts saltwater into freshwater.