The ‘hellish market’ of wild animals in Long An

In the southern province of Long An, there is a large market, existing for tens of years, called ‘a hellish market’, where wild animals are slaughtered and sold every day. 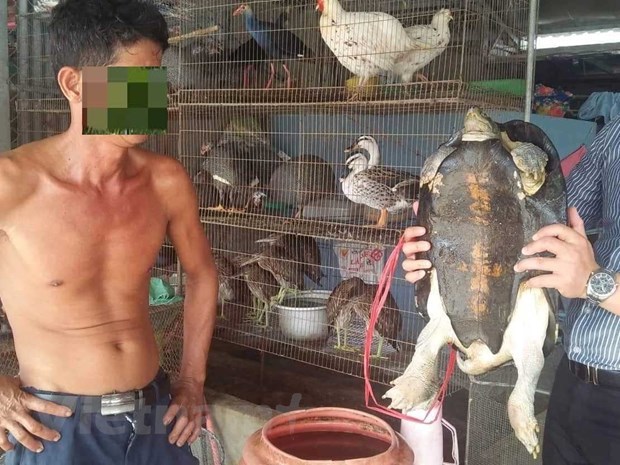 However, what they saw at Thanh Hoa Farm Produce Market in Long An proved to be much more horror. Thousands of Red-book animals in Mekong River Delta were displayed and sold there.

There were about 40 stalls that sold wild animals with hundreds of iron cages containing birds, turtles and snakes and co oc (Anastomus oscitans).

Co oc (Anastomus oscitans) are the main character in the film “Khi co oc tro ve” (When the storks return) which has just been awarded the first prize at the National Film Festival about the environment in early 2018.

The stocks in the film helped farmers kill snail-fish which devastates crops. The film shows a beautiful image that Vietnamese farmers could not see for a long time: the flocks of stocks fly in the blue sky above the green rice fields.

However, at Thanh Hoa Market, hundreds of storks were seen confined in tens of iron cages. They were wrapped with tape around the bodies, while their wings were clipped. The poor storks were lying about in the stalls. Some of them were plucked, while others were burnt alive to be delivered to clients.

Besides co oc, a lot of chim cat (falcon), ga nuoc (Rallidae) and young eagles which were still blood red and trembling in fear were also put up for sale. Later, they would be slaughtered and sold to customers, who wanted to eat them. Some storks were seen kicking convulsively when the fire from the mini gas stoves hit them.

All these images haunted people who witnessed them.

Along with birds, snakes were also displayed at the market. During the two-day presence at the hell market, reporters saw trucks bringing many snakes to the market. The snakes were later put into the iron cages covered with net at the stalls.

All species of snakes, from commonly seen water snake to cobra (Ophiophagus Hannah) weighing several kilograms were displayed for sale in the open air despite ban.

Reporters witnessed hundreds of transactions in which hundreds of animals were sold and carried to other provinces.