Vietnam begins thinking of how to deal with expired solar panels

The Ministry of Natural Resources and Environment (MONRE), which is compiling the draft of the amended law on environmental protection, 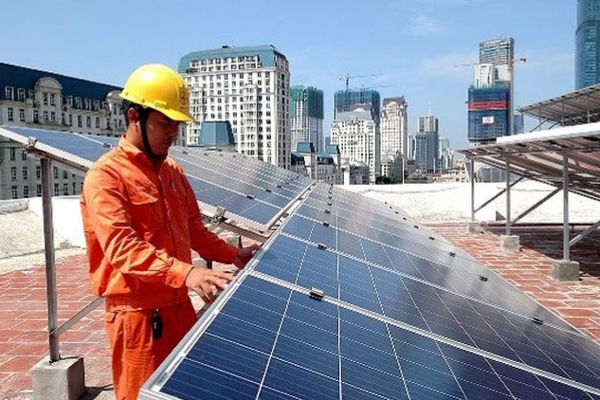 The hot development of solar power plants in Vietnam in recent years has raised concerns about the environmental impact that solar panels may have after they expire. Research works all have pointed out that the heavy metal from photovoltaic panels may harm people’s health.

Shifting to renewable energy is a growing trend in all countries in the world, including Vietnam. This is an effective solution for sustainable development as it generates electricity to satisfy increasingly high electricity demand in the context of coal mines and oil fields getting exhausted.

Of the renewable energy sources, solar power has been developing rapidly, ranking third, after hydropower and wind power in installation capacity.

A report on renewable energy shows that the total solar power installation capacity in 2019 reached 627 GW all over the globe, while Vietnam is among top five fastest growing countries in solar power capacity, just after China, the US, India and Japan.

The total solar power capacity put into exploitation in 2019 was 4.8 GW, a sharp increase from the 108 MW just one year before.

Considered a clean energy source, but solar power has raised a big concern: where will used solar panels go after they expire?

According to the Ministry of Natural Resources and the Environment (MONRE), the average life expectancy of PV modules are 10-20 years, depending on where solar power systems are installed and the local environment.

Research has found that the use of PV modules may cause environmental impacts. For example, they occupy large areas and cause heat pollution, which affects human vision.

To make solar panels, some heavy metals such as Cd and Si are used, which have an impact on the exploitation and use of natural resources.

In general, if waste solar panels cannot be buried properly, they will pollute the soil and water from the heavy metal generation or hazardous emissions. If they cause fire, the elements will harm people’s health.

The EU has set regulations on treating electric and electronic waste, including used solar panels, under which collecting and treating the waste is the responsibility of manufacturers.

Manufacturers are responsible for recalling, reusing and recycling the solar panels they make to recollect the useful components for use for other purposes in order to reduce the volume of waste to be discharged into the environment.

In Vietnam, the management of solar panel waste is implemented in accordance with regulations on waste treatment.

How will solar panels be used when their life cycle ends?

Time to think about recycling of end-of-life solar panels: experts

The growth of solar power generation in Vietnam has come alongside increasing concern over the disposal of end-of-life solar panels in the coming decades.