Where should HCMC's polluting workshops be relocated?

The plan to relocate polluting factories was initiated by HCM City authorities in 2002, but the results remain very modest.

A report shows that there are about 1,000 large factories and tens of thousands of small production workshops still located in residential quarters. 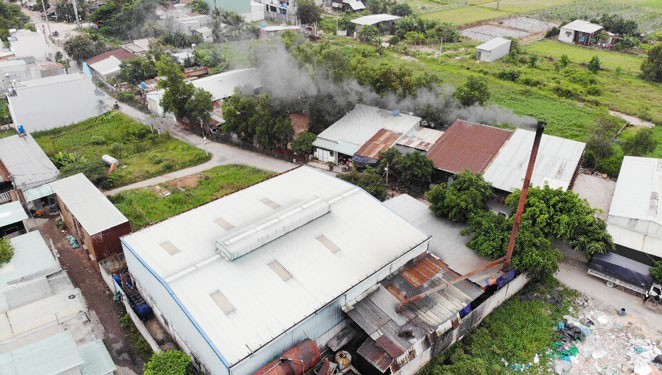 Having been asked to move for the last two years, H.M, a chemicals company in Xuan Thoi Thuong commune of Hoc Mon district, has yet to move.

M, a representative of the chemicals company, said the company cannot leave because of a lack of money.

“We know that a chemicals company must not be located in residential quarter. People keep complaining while local authorities always urge us to move. However, we don’t have capital for re-investment,” he said.

“If we relocate the factory, we have to buy or lease land. We don’t have money to do this. If the state gives support in capital and land, things will be easier,” he said.

H.M still maintains its operation and only closes when inspectors come.

Khang had to spend big money to upgrade machines and equipment to reduce smoke and noise. However, this was just a temporary solution.

If he sets up the workshop in Le Minh Xuan IZ, he would not have money to pay for rent.

An official of the district 12’s environment sub-department said one of the biggest problems in relocating polluting workshops is the difficulty in finding destinations.

The agency has completed the relocation of 42 ‘hot spots’ in Dong Hung Thuan Ward in the district which took four years. The officials of the sub-department had to spend two years to travel to the provinces of Long An and Tay Ninh to find places for workshops to move to.

Small production workshops don’t have opportunities to enter IZs, because many IZs only lease land in large area, 1 hectare at minimum. Other IZs don’t accept factories which cause pollution.

A representative of tmdistrict 9’s environment sub-department also said the demand for land from small and medium enterprises is high, but each of them only needs several thousand square meters, so they cannot meet the requirements to enter IZs.

Rang Dong plans to relocate its existing facility to Hoa Lac High-Tech Park to manufacture LED lights with the total investment of $34.78 million.

Detoxification at Rang Dong warehouse fire to be finished soon

The detoxification work at Rang Dong Light Source & Vacuum Flask JSC in Hanoi is slated to be completed within the next five days.