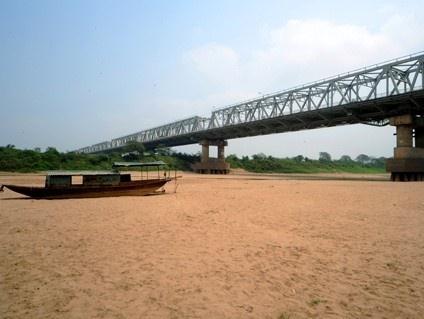 According to Tran Dinh Hoa, deputy head of the Vietnam Institute of Water Resources, an arm of MARD, many sections of the Red River which run across Hanoi have become so depleted in recent years that the river-bottom is visible.

He said the volume of alluvium going to the lower course has been decreasing dramatically. Since sand overexploitation has become uncontrollable, the river is getting exhausted, affecting waterway transport. Meanwhile, irrigation works cannot get water to irrigate rice fields.

In such conditions, the Electricity of Vietnam (EVN) every year has to discharge 5 billion cubic meters of water from hydropower reservoirs to provide to the irrigation system.

However, in fact, the water volume taken for the irrigation system just accounts for 20 percent, or 1 billion cubic meters, while the other 4 billion cubic meters go to the sea. After every campaign of water discharge, the Red River has become exhausted again.

Hoa said MARD has suggested building two spillways in the immediate time in the Long Tuu sewer on Duong River, a branch of the Red River and another in Xuan Quan sewer.

If spillways can be installed in the two places, three big irrigation systems in the north, including Bac Hung Hai, Bac Duong and Nhue River, will have water for irrigation. The spillways will help regulate the water flow through the Duong River.

Pham Hong Giang, chair of the Association for Large Dams and Water Resource Development, stressed that the water depletion on the Red River in the dry season was serious.

He also thinks it is necessary to build spillways to raise the water level in the lower course of the Red River, from Viet Tri to the sea estuary.

Giang said it would be necessary to thoroughly consider the places for setting up the spillways to ensure economic efficiency, landscapes and environment.

Meanwhile, Dao Trong Tu, a river network expert, does not think it is a good idea to build spillways on the Red River, which runs across the capital city.

Tu said though similar spillways were built in some capital cities in the world, this is not the preferred choice.