Realizing that they will have to ‘live with the pandemic’ for a long time, seafood companies have reorganized their production to adapt to the new circumstances. 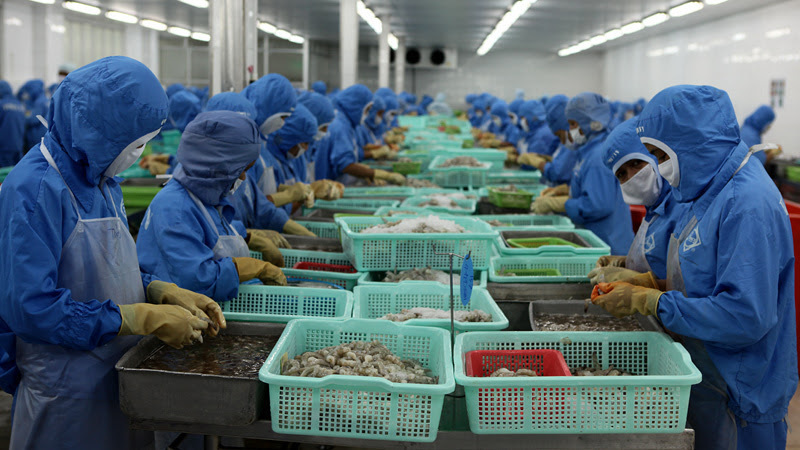 The Ministry of Agriculture and Rural Development (MARD) showed satisfactory exports of seafood in the first seven months of the year, when businesses took advantage of the surging demand in the world market, while other exporters were seriously hit by the Covid-19 pandemic. Seafood exports brought turnover of $4.9 billion, an increase of 12 percent over the same period last year, including $800 million in July.

Analysts noted that the exports to major markets in the first seven months all saw two-digit growth rates, including the US (38.7 percent), EU (20 percent), Russia, Australia and under CPTPP (the Comprehensive and Progressive Agreement for Trans-Pacific Partnership) by 65 percent, 60.5 percent and 10.5 percent, respectively.

According to Vietnam Association of Seafood Exporters and Producers (VASEP), the rapid spread of Covid-19 and the lockdowns under Directive 16 in HCM City and southern provinces all have had an impact on seafood processing and export companies.

The association has 270 members, most of them in Mekong Delta provinces and the south Central Region. Local authorities have told enterprises to only maintain operation if they can satisfy the requirements of ‘three on-the-spot’ (production, quarantine eating/resting on the spot) and ‘one route, two places’ (transporting workers on the same route between the two places – where their live and where they work (factories).

However, enterprises complain that the requirements have caused difficulties for operation.

Le Van Quang, president of Minh Phu Seafood in Ca Mau province, said the production cost would be very high to observe these principles. The company could only have 20-25 percent of workers at maximum. If the factory operated with only 20-25 percent, it would incur heavy losses in normal conditions, let alone the current difficult period.

President of Vinh Hoan JSC Truong Thi Le Khanh complained that the expenses for periodic testing was up to tens of billions of dong, while expenses for meals and allowances to workers had increased by 50 percent of the labor cost per kilogram of products, and the general management cost had risen by 30 percent because of the productivity decrease.

As such, the company has to pay a lot for ‘three on-the-spot’ process, while the production capacity is just 50 percent.

In fact, only 30 percent of seafood companies in southern provinces can satisfy the requirements to apply ‘three on-the-spot', and the number of workers mobilized is only 30-50 percent of total workers. The average production capacity has decreased by 50-60 percent.

Companies also complained that the materials for processing and packaging supply have fallen by 50 percent.

While production is becoming stagnant, orders have been canceled or postponed. The production cost soared because of the ‘three on-the-spot' principle, thus putting pressure on seafood companies. Besides, the shipping freight had increased by 2-10 times, according to VASEP.

Businesses ‘live together with pandemic’

VASEP has reported the difficulties to the Prime Minister and MARD, and proposed measures to resume production and export after the ‘three on-the-spot’ period.

The association asked to give priority to workers at seafood processing factories for vaccinations.

“If workers are vaccinated, we will be able to both retain export partners and maintain production and jobs for laborers, including farmers, material producers and fishermen,” VASEP said.

Seafood companies, understanding that they will have to ‘live with the pandemic’ for a long time, have asked the Ministry of Health (MOH) to compile a set of rules for companies and train them to practice ‘healthcare on the spot’. This has been applied in some countries, including the US.

The association also wants preferential policies to overcome current difficulties, including lower lending interest rates, cut in electricity bills by 30 percent until the end of 2021, and reduction of the trade union fee from 2 percent of wage fund to 1 percent.

The support will help businesses maintain ‘three on-the-spot' and have more resources to recover production and export.

Nguyen Ngo Vi Tam, CEO of Vinh Hoan Seafood, said ‘three on-the-spot’ is just a temporary solution. With the principle, businesses can run at 50 percent of capacity only, and not use all the outstanding volume of fish. Therefore, enterprises are considering a ‘post- on the three spot’ in reference to other countries’ experience.

In the UK, for example, many areas have not fully opened but seafood companies still can maintain production. As for Vietnamese enterprises, production will run as usual if workers are vaccinated, provided that the factories have quick testing capability to control the disease.

A representative of Co May Company said they wanted banks to accept goods in warehouses as collateral for loans, cut interest rates, increase loan terms, and reduce service fees.

Despite being significantly affected by the Covid-19 pandemic, Vietnam's agricultural, forestry and fishery exports still earned 28.6 billion USD in the past seven months, up 26.7% over the same period last year.

Many seafood processing companies in the South are facing difficulties keeping their workers on-site amid the Covid-19 outbreak as required by the authorities, according to Truong Dinh Hoe, VASEP general secretary.