Unusual items made by craftspeople and cooks in Vietnam: 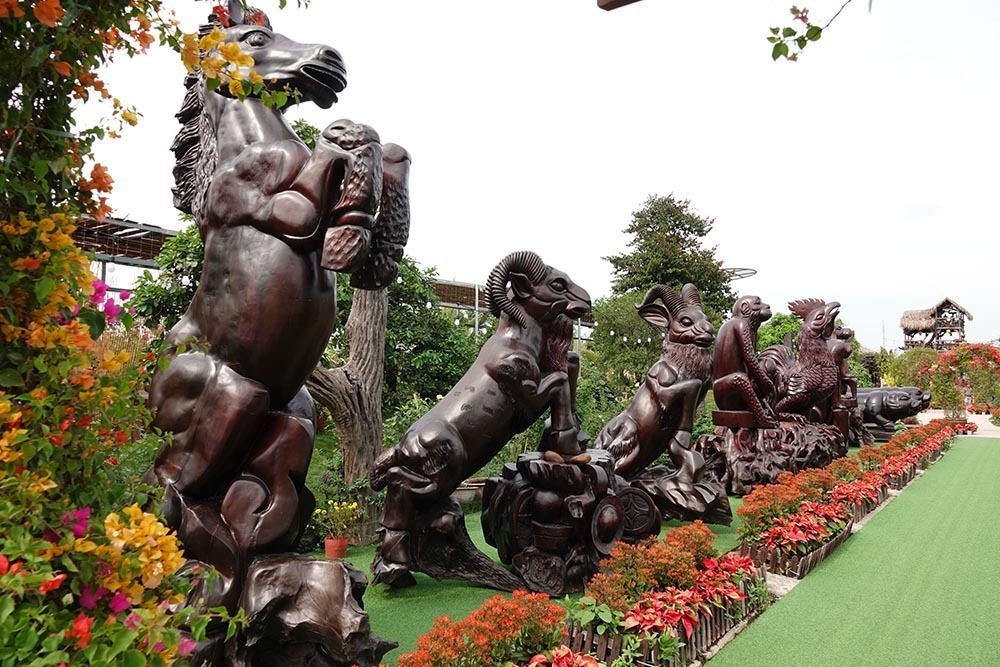 The art works made of go lua

In An Giang Province, pieces of centuries-old driftwood are picked up from the bottom of Tien River to be carved into original and precious works by artisans.

Nguyen Van Nghi, 43, in Cho Moi district of An Giang province, is owner of a collection of items made of driftwood, or called ‘go lua’ by Mekong Delta’s people, hundreds of years old, picked up from Tien River bottom.

The collection has 40 large art works – two sets of 12 Zodiacs, Buddha statue, rockery, 24.5m long painting, house made of driftwood, 3D painting engraving table, and set of tables and chairs. The sculptures are lively and soulful, as if they are telling stories.

According to Dan Tri Newspaper, Ha Tinh province has a special village where people have been sewing leaf raincoats for the last 200 years. The work is done all year round, but the third and sixth months of lunar year (from April to July) are the busiest time.

After a lot of ups and downs, the traditional career has been still preserved. Leaf raincoats not only helps people hide from the burning sun and nipping cold, but also help local farmers earn extra money.

The raincoat is made of palm leaves or rattan. It takes nearly two hours to make. For many farmers in Ha Tinh province, leaf raincoats are used in different weather conditions.

The restaurant in HCM City provides beefsteak made in a special way. No pot or pan is needed to make the dish. Beefsteak is cooked with an iron.

The owner is a lover of antiques, so he devised a way to cook beef in this way.

The dish is served in a special way at the restaurant. Beef pieces and an iron are brought to tables. Customers themselves put the iron on the beef, marinated with spices, to cook.

Pho chua, or sour noodle soup, was introduced into the northern mountainous provinces of Ha Giang, Lang Son and Cao Bang 300 years ago.

In the past, sour noodles were only served at banquets. But it is now a favorite dish for breakfast for Ha Giang’s people.

The ingredient that creates the typical taste of pho chua is the sweet and sour broth. The special broth is made up of a very sour vinegar mixed with sugar, tapioca flour and a little spice.

Trung vit lon, or balut (fertilized duck egg) is a familiar dish to Vietnamese people. It is cheap and believed to be the best source of protein and calcium. This egg is eaten together with rau ram (Coriander), ginger and spices.

But in Hue City in the central region, ta shop sells balut prepared in a way that creates a new taste, thus attracting diners.

The eggs, after peeling, are mixed with some spices, including onion, pepper, fish sauce, ginger, rieng (Alpinia officinarum), rau ram, melon, lime leaves, fresh pepper, chili and garlic before they are served to clients.

Rotten buffalo skin in the Northwest

Rotten buffalo skin, also known as ‘nang min’, is a typical dish of the Thai ethnic people in the Northwest.

After preliminary treatment, buffalo skin is wrapped in banana leaves and incubated for about two days depending on weather conditions.

After a period of incubation, the smelly buffalo skin is washed, and the hair on the skin falls off. People then dry the skin and use it to cook soup or grill.

This dish may be disliked by many people because of its odor of rotten skin. However, it is a specialty for people who like the original taste.

Old jeans, banana ocrea and cajuput bark can be turned into valuable paintings through the talented and creative hands of a man in Kien Giang province.

In 2004, Le Hoang Nhan recycled cajuput bark material into unique paintings. In 2019, the painter released eye-catching pictures made from banana ocreas and jeans. In 2020, Nhan created paintings made from jeans.