The country’s road map aims to improve the quality and reliability of the national power supply and the efficient use of electricity. 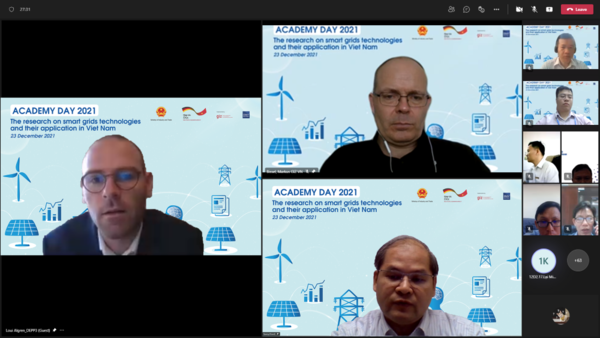 Widespread adoption of smart grids will help optimize the power grid’s use of renewable energy as both domestic and foreign experts have shared ideas in a project conducted by Vietnam under the support of the Government of Germany.

The adoption requires research into smart grids from different stakeholders to support the development of the country’s Smart Grid Road Map and a workshop that exchanged knowledge and experience from both state agencies and professional organizations becomes more than meaningful.

In this regard, Academy Day – a conference – offered opportunities to local and international university academics, research institutes, and private companies to matchmake and present their research results.

Cohosted on December 23 by the Electricity Regulatory Authority of Vietnam (ERAV) of the Ministry of Industry and Trade (MoIT), and the Deutsche Gesellschaft für Internationale Zusammenarbeit (GIZ) GmbH, “Academy Day 2021” gathered representatives from the National Load Dispatch Center (NLDC) of the Vietnam Electricity (EVN), the Vietnam Electrical Engineering Association, power construction consulting firms, among others.

The Academy Day was part of the Smart Grids for Renewable Energy and Energy Efficiency (SGREEE) Project, which is jointly implemented by ERAV and GIZ, on behalf of the German Federal Ministry for Economic Cooperation and Development (BMZ). Within the framework of this year’s workshop, close cooperation with the Danish Energy Agency (DEA) was established to achieve the greatest possible benefit for Vietnam.

During the workshop, the speakers presented their research on smart grids, energy efficiency, and the integration of variable renewable energy in Vietnam, Germany, and Denmark.

The main topics were studies on the operation and control of rooftop solar power systems, voltage-regulated distribution transformers, protocols of shared data centers, and Danish experiences with energy communities. Discussions focused on how to create a favorable environment for smart grid research and support the authorities to modernize the power grid when more renewable energy sources will be connected.

Attending the event, Loui Algren, an advisor to the Danish Energy Partnership Program (DEPP/DEA), said “I’m happy that Denmark joined the Academy Day this year and hope that the Danish contribution inspired to solutions on how to reach Vietnam’s ambitious target for net-zero emissions in 2050.”

According to Markus Bissel, SGREEE Project Director, experts, and researchers can discuss and study the latest research on smart grids, promoting innovations and applications of the issue in Vietnam. “The event is contributing to the country’s modern power grid and the development of its Smart Grid Road Map when Vietnam witnesses a prompt increase of renewable energy penetration into the power network,” he said.

“DEA and GIZ, as neighboring European states, have been supporting the Vietnamese government on energy-related topics for a long time. Through the close cooperation on this year’s event, therefore, both are leveraging synergies in order to use the financial resources as efficiently as possible,” Markus added.

Smart grid technologies not only allow the transmission of electricity but also increase levels of information and communication between the various system components, which can improve the reliability, security, and efficiency of the power system. For that reason, the Government of Vietnam in 2012 released a strategy on developing the smart grid in Vietnam (Smart Grid Road Map) after recognizing the great benefit of upgrading the national power transmission system.

Transparent mechanisms advised to make most of offshore wind potential

Offshore wind power is poised to become a key pillar of the nation’s energy transition, and its rapid development is imperative for Vietnam’s net emissions reduction. However, issues remain with policy frameworks and grid capacity.