After wasting a lot of flour, eggs butter, sugar and other ingredients, as well as time, Ngo Kim Dung has finally become a successful baker.

“I have been at home for weeks because of social distancing. I don’t want to stay doing nothing so I tried to learn new skills and I chose baking,” Dung said.

“I have joined many groups for cooking and baking on Facebook and watched a lot of clips on YouTube. It was not easy at the beginning but now I am doing well,” she said while showing her homemade tiny bánh mì, a hot trend bread in the last two weeks, that she just took from the oven.

The 35-year-old can now bake simple offerings like a choux pastry to more complex thinks like birthday cakes.

She has also won over her two kids by serving them delicious and eye-catching dishes.

“Normally, my dishes were just edible. I just cooked simply and fed them, thinking fine ingredients would make good meals and that is enough. I'm also busy with work so don't have time to think much about cooking,” said Dung.

However, after joining the groups, she changed her mind.

“It was a great feeling when my kids said ‘wow’ and ‘yummy’ when they tasted my fried chicken. I told them, ‘it is a kind of KFC-style chicken leg. It is nearly as good as the real ones.’ And they answered ‘Nooooo! it is much better’. I didn't expect to hear that. But it was wonderful and encouraged me to cook better,” she said.

In her meals now, there are not only appetisers for starter and savouries for the main course but also fruit or sweet soup or cake for dessert.

Dung is one of many people who have brushed up on their cooking skills amid the pandemic.

Tran Tuan Dung has been made temporally jobless because of the coronavirus and the 23-year-old waiter now cooks his family’s daily meals.

He has tried to bring recipes he learnt in the restaurant kitchen to the table at home.

“I follow the recipes and sometimes I change a little to make it more suitable to my family’s taste. I never thought I could cook phở, Vietnamese dishes, pizza, spaghetti and beefsteak. My mom calls me a ‘super cook’,” said Dung, who also shares and receives cooking tips and experiences on social media.

Nguyen Nhu Quynh has also had to cook for herself for weeks.

Living in a rented apartment in Hanoi, Thuy often ordered food home instead of cooing.

“I am kind of lazy. I live alone and cooking takes time and makes me bored and it is not as good as food from restaurants,” said Quynh.

“But I don’t have a choice when working from home. I have to go shopping and make menus by myself. To eat delicious dishes, I have to search on Facebook and the internet. Surprisingly, I fell in love with cooking,” she said.

She said none of her friends believed she could cook and couldn't imagine her spending hours in the kitchen until she starting posting her beautiful dishes on Facebook.

Meanwhile, Hanoian Nguyen Thu Thuy has fed her passion due to the COVID-19 outbreak.

“I love cooking and have taken several offline courses. However, my time is limited and I have no chance to show off. Now, in this crisis period, I have learnt more from the internet and practice at home,” Thuy said.

“Killing free time with cooking is so sweet. It helps me relax while inspiring many others to cook and share,” she said.

Thuy often cooked Vietnamese dishes for her family in the past but now she is confident with both Asian and European recipes as well as savoury and vegetarian meals.

“The dishes must be not only tasty and nice to look at but also nutritious. It takes time to search, cook and present, but it's worth it,” she said. VNS

Is your favourite coffee shop closed? The restaurant you love to eat at shut right now? Don’t worry too much, we have option for you.

Ngu Vien Heritage offers the vegetarian side of menu

So the news on climate change does not look good. The world keeps getting a little warmer every year. 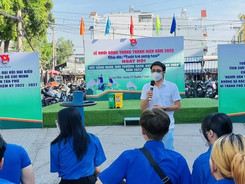