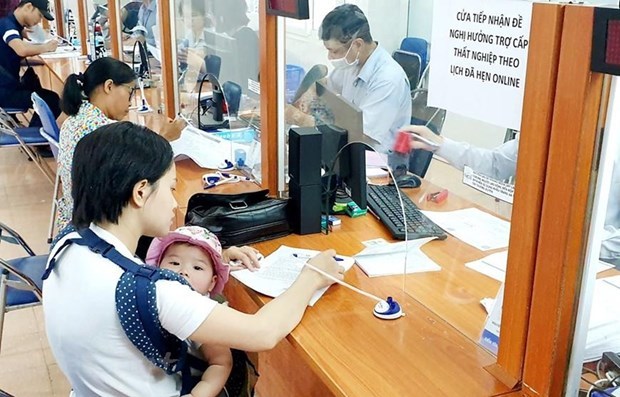 Last year, some 14 million people facing difficulties amid the COVID-19 pandemic received support from an emergency assistance package. Social insurance, unemployment insurance, and health insurance policies also played an important role in helping share the burden with the Government in addressing the impact of the pandemic crisis.

According to figures from employment service centres in Vietnam's 63 cities and provinces, more than 1 million people applied for unemployment benefits last year, an increase of 32.3 percent compared to 2019.

About 1.06 million people received unemployment benefits with a total value of 18.2 trillion VND (791 million USD), with a monthly average of over 3 million VND (130 USD) per person.

The Government also implemented an emergency support package for 1 million workers who were not entitled to unemployment insurance, totalling over 1 trillion VND (nearly 45 million USD). Beneficiaries were workers with suspended contracts, those having to take unpaid leave, or having their contracts terminated but not eligible for unemployment benefits.

Minister of Labour, Invalids and Social Affairs Dao Ngoc Dung said that social and health insurance policies have become the main pillars of the country’s social security system, especially voluntary social insurance, in the spirit of Resolution No 28. So far, over 90 percent of the population have health insurance, up 12.7-fold compared to 1995. The number of people joining voluntary social insurance increased three-fold during three year from 2018-2020 to 750,000.

The social service system has been improved, basically ensuring the right to access education, health, and housing services, clean water, and information and communications services, he noted.

In addition to insurance policies, social assistance also plays an important role in the social security system, covering almost all groups, with 3 percent of the population receiving monthly social benefits, children and the elderly receiving protection and care, and the disabled provided with rehabilitation, vocational training and job placement.

Chang-Hee Lee, Country Director of the International Labour Organisation in Vietnam, stressed that social protection should continue to play a priority role in assistance packages.

These packages will help consolidate measures already taken to protect people and their livelihoods in the future, he said.

According to Lee, the Vietnamese Government’s solutions to provide emergency assistance in cash to those impacted by COVID-19 is a commendable effort.

Social protection systems truly played an important role in responding to the health crisis and addressing the resulting economic and social impacts, he emphasised.

The impact of the pandemic continues to pose a lot of potential risks of financial and monetary instability, so social security will continue to be a tool for economic and social stabilisation.

Evidence from past crises shows that social protection has more positive effects on the economy than other solutions, Lee said, adding that the system of social protection ensures that low and middle-income households can sustain their consumption, thus boosting demand and laying out a solid path to post-crisis recovery.

The World Bank (WB) believes that the social security system will become a core part of both economic and social policies in Vietnam.

The Ministry of Labour, Invalids and Social Affairs will continue to focus on developing a comprehensive social security system, towards the goal of covering the entire population, and synchronously and effectively implementing policies on social welfare, thus realising the goal of rapid and sustainable development.