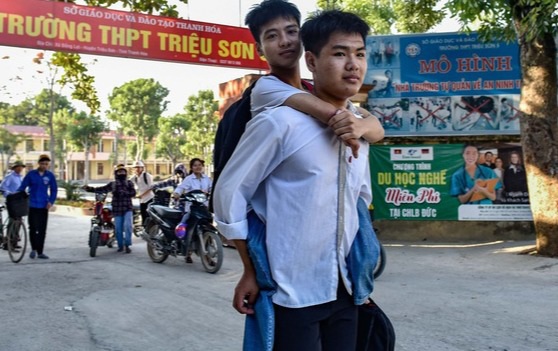 Answering questions from the media on October 6, Ngo Minh Hieu, 18, said that he had received the offer from the Thai Binh Medical University and he decided to study there.

Hieu and his close friend Nguyen Tat Minh were classmates at secondary school and high school. They grew up together in a poor village in the northern central province of Thanh Hoa. The boys were famous in the area not only thanks to their excellent performance at school but also because of their close relationship. Minh was disabled and Hieu had helped take him to school for over 10 years.

The two friends tried a lot in their study and they both got high scores at the national high school graduation exams this year. The disabled boy Minh won a place at the prestigious Hanoi University of Science and Technology. Hieu, although got higher scores than Minh failed to be admitted to the Hanoi Medical University which is always the country's toughest place to get into with almost top marks. 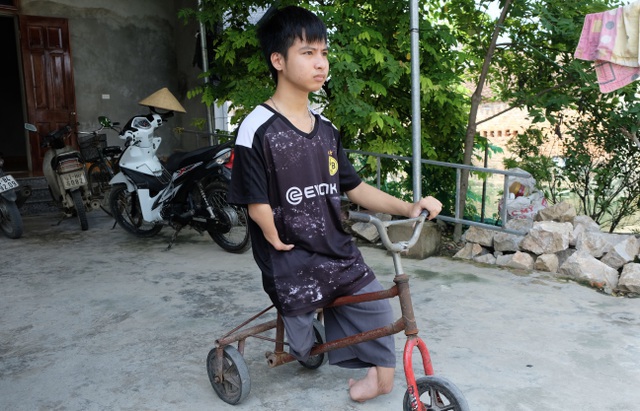 Nguyen Tat Minh wins a place at the prestigious Hanoi University of Science and Technology.

The story of Hieu and Minh has received lots of attention from the public many of whom have called on the Hanoi Medical University to give Hieu a priority because he was a "special" man.

"Hieu already has a very kind heart that every doctor needs to have," a reader shared a comment on a story about the two friends. "His scores were also excellent, just a little bit below the requirement but I think the Hanoi Medical University should take him as a special case."

Responding to the public's comments and opinions about the case, rector of the Hanoi Medical University, Prof. Ta Thanh Van said that he was moved by Hieu's kindness and appreciated his scores, but the school should be fair to other students.

"The score difference of a 0.25 mark seems small but it is really big in the tough competition at our school," he said. "If we admitted Hieu, hundreds of other students would lose their chance and I think this is not fair for them. There are other good medical schools that admit his scores, and I'm sure that with his efforts, I can surely be trained into a good doctor."

Hieu said that he is happy to study at Thai Binh Medical University and is preparing to arrive at the school on October 10.

"I'm confident that I can study well and realise my dream of becoming a good doctor in the future here," he said. "I am just feeling a bit sad because Minh and I can’t study in the same city as we had planned. "I’m now far from Minh and cannot help him if he needs me." Dtinews

Cursing in school: are teachers giving in to students?

Schools have been trying to prevent students from using foul language, and have even released regulations, but with little success.