The headmaster of a secondary school in Tan Binh district, HCMC, complained that the school lacks many teachers, including teachers of English. 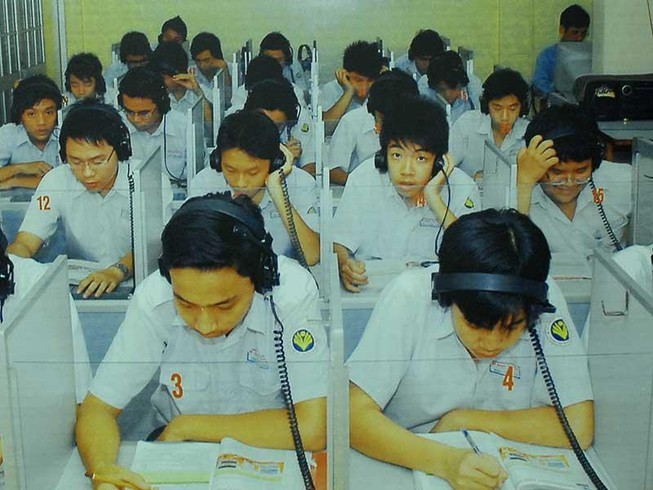 Last year, the school had four teachers of English. But one of them left for a school in Cu Chi district, while another resigned for personal reasons.

Two teachers still work for the school, but one of them is on maternity leave. After a new teacher was allocated, the school now has only two teachers for 24 classes.

Duong Van Dan, head of the district 8’s education sub-department, said before the new academic year begins, the district recruited 217 teachers, but it could not recruit teachers of English for primary school.

“We sought to recruit eight teachers of English for local primary schools, but there was no candidate,” he said.

“We need 22 teachers for secondary schools, but could recruit 15 only. Primary schools need 46 teachers, but only 13 have been recruited,” he said.

The HCMC Education and Training Department has also confirmed the shortage of teachers of English for the schools belonging to the department. Nguyen Van Hieu, deputy director of the department, said the department wanted 80 teachers in the latest recruitment campaign, but there were only 65 candidates.

Tan said it is difficult to find teachers of English because of the high requirements set by the Ministry of Education and Training. Teachers must finish pedagogical schools, while their second foreign languages must meet the second level out of six levels applied in Vietnam. Very few candidates can meet the requirements.

Meanwhile, the current recruitment mechanism is unreasonable. Under current regulations, the primary schools which have two shifts a day (morning and afternoon) can allocate 1.5 teachers at maximum for one class, while the schools which run one learning shift a day can allocate 1.2 teachers, not including teachers of English. The teachers allocated can teach many subjects, including physical education, music and art.

Under MOET’s program on teaching foreign languages at general schools, students have four foreign language lessons a week, free of charge. And under Decision No 448 of the HCMC People’s Committee on teaching English from the first grade, students have 8 English lessons a week, with fee. However, both of these legal documents do not mention staffing.

The efforts to improve English teaching and learning quality have been disappointing. English was one of two subjects with the lowest scores at the 2019 high school final exam.