After making landfall in the Central provinces of Phu Yen and Khanh Hoa last night, typhoon Nakri weakened into a tropical low pressure system and a low pressure zone this morning.

The center has warned mountainous areas of heavy-rain triggered flash flood and landslide while low lying areas should remain vigilant over flooding in the aftermath of the typhoon.

In Phu Yen, rains have abated in many areas. At 10:30 pm on November 10, deputy chairman of the provincial People’s Committee Tran Huu The said that the typhoon caused power blackout over wide area. Before the storm made landfall, the province had evacuated 36,000 people to safe places.

In the neighboring province of Binh Dinh, about 6,000 households were evacuated out from vulnerable areas at 11am on November 10. Local authorities guided fishing boats to shelters.

Border army force and local residents used thousands of sand bags and stone gabion for temporary repair of an embankment breach, caused by the previous typhoon Matmo at the end of October, in Nhon Hai peninsula.

Representatives from the air carriers said that besides the aforementioned, the other domestic flights will also be affected due to the storm.

As many as 49 flights of Vietnamese domestic air carriers have been canceled, leading to a series of other flights rescheduled due to the influence of storm Nakri, the six in Vietnam so far this year, in the central part of the country, Tuoi Tre news reported.

Besides 20 canceled flights, national flag carrier Vietnam Airlines and Jetstar Pacific announced to cancel an additional of eight flights in the afternoon and the evening of November 10.

Representatives from the air carriers said that besides the aforementioned, the other domestic flights will also be affected due to the storm. The passengers on the affected flights are compensated according to the regulation.

National flag carrier Vietnam Airlines and Jetstar Pacific on November 10 announced that they will adjust schedules of fights from/to Phu Yen, Quy Nhon, Nha Trang and Pleiku on November 10 due to storm Nakri.

Local authorities and residents of the central and southcentral regions are taking a number of drastic steps in response to the incoming storm No. 6 (Nakri). 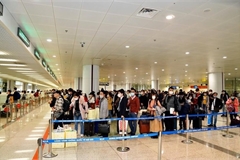 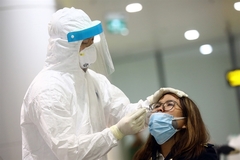