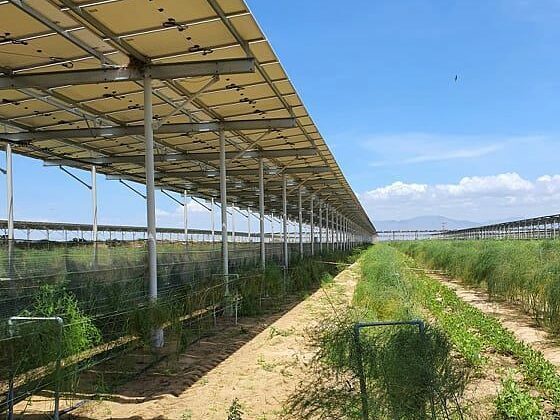 Besides farming items, he has also spent VND10 billion on a solar power generation system with capacity of 1 MW which serves production activities and sells to the national grid.

Son worked with the Ninh Thuan Power Company to install a two-way meter to record the volume of electricity to be provided to the grid. However, he still cannot sign a contract on selling electricity to EVN.

In order to determine the electricity price in accordance with Decision 13, it is necessary to identify if it is on-grid solar power or rooftop solar power (the prices of the two kinds of solar power differ).

However, both EVN and investors are confused because there is no guideline on how to differentiate rooftop and ground-mounted solar projects.

An enterprise in Ninh Thuan province is also facing the same problem. He has installed a solar power system on his office building, production workshop and cattle farms.

In order to optimize production, Tien, the owner of a farm in Ninh Phuoc district of Ninh Thuan province, uses open nethouses, not roofing sheets, and installed a part of the solar panel system on the nethouse frame.

However, that is why Tien still cannot sell electricity to EVN. The delay in selling electricity may cause a loss of billions of dong to Tien.

A representative of the Ninh Thuan Power Company confirmed that the company has installed two-way meters to record electricity at solar farms, but still cannot sign contracts with sellers and make payments for the electricity from the farms.

Meanwhile, EVN admitted that it is confused about the defining of prices and has asked the Department of Electricity & Renewable Energy to clarify this.

EVN has also asked MOIT to assign local industry and trade departments to examine solar power projects to affirm the conformity of the solar power systems with standards so that power companies can sign PPAs with investors.

Vietnam is witnessing a so-called ‘solar power rush’. Individuals and enterprises are rushing to install solar power systems, which allow them to enjoy high selling prices, save money, and polish their image.